I’ve always found Ghostbusters comics and graphic novels to be very interesting. They just about always feel the same. Repetitive stories that involve an array of ghosts, ghouls and elder gods. The guys go through hell (sometimes literally) before ultimately finding a way to right the wrongs of the universe. There is very little in the way of diversity when it comes to these books, and that’s the honest truth.

The other honest truth is, most of these books are a blast!

Ghostbusters: Get Real sees the gang deposited into another parallel universe, where another group of Ghostbusters work to combat the paranormal menaces that stalk their own city. We’ve seen this tactic – or at least a very similar tactic – used in previous GB books, but in this case it feels very natural, as Proteus, one of the nasty elder Gods is on the hunt for our familiar Ghostbusters, determined to bring about their undoing, but he’s uncertain of precisely which universe in which they reside. Hence the hunt and the valid reasoning for “other” Ghostbusters in other dimensions.

As you’ve likely already guessed, Proteus does eventually catch up with our loveable heroes. A battle ensues, and while the final confrontation feels a bit rushed, there’s fun to be had here. A fair measure of the entertainment comes courtesy of the always-amazing Janine, who does as she’s done plenty of times in the past, saving these boys’ tails.

Erik Burnham’s script falls perfectly in line with everything we know about the Ghostbusters and their personalities. While his conflict isn’t ground breaking – as noted – it does work to keep the reader engaged. Dan Schoening’s artwork is now very familiar, and he’s proven, over and over again, that he’s the perfect man to illustrate Peter Venkman, Raymond Stantz, Egon Spengler, Winston Zeddmore and, of course, Janine Melnitz.

This book is for the hardcore Ghostbusters fans and those who are after a lighter read If you’re hoping for some truly intense, terrifying content, this isn’t the book for you.

My suggestion? Pick it up. 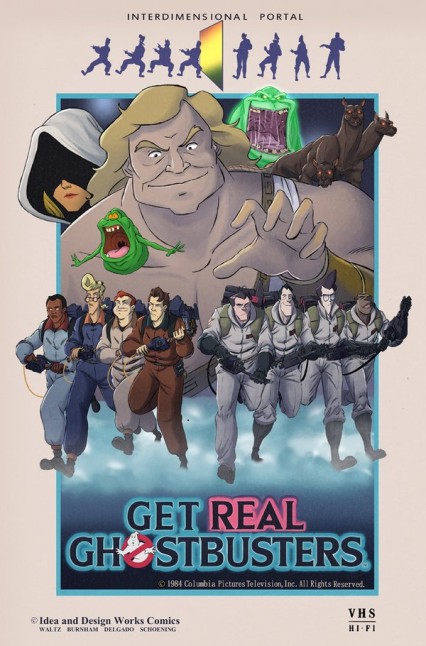