My Family follows a family of seven living somewhere in the British countryside. One night a strange couple shows up on their doorstep requesting help. Their car has broken down and they need the use of a telephone. The family assists them and they move along.

Yet, in horror, no good deed goes unpunished. The couple returns a few days later. They offer to help those that helped them. The couple has always wanted to be parents and they could not help but notice that the family was rather large, consisting of a dad, a mom, and five girls. They insist the family let them adopt two of their children.

Saying no is not an option. The family can give two children or die. It is that simple. The couple is even willing to let the family decide which two they take. After all, they are trying to help them.

Unlike most of Shaw’s other novellas, My Family is not written from a first person perspective. Instead the narrative follows a more traditional third person style. This delivery is outside Shaw’s comfort zone and it shows. At times the dialogue, in terms of who is speaking, can seem a bit confusing. It is made worse by the two male leads possessing similar names (Jeff and James).

More important to fans of splatterpunk is the absence of extreme content until the last quarter of the novella. Most of horror throughout the book is of a psychological, not physical, nature. However for those willing to wait, the narrative does eventually descend into graphic depictions of torture and rape.

Overall, My Family is not Shaw’s strongest work to date. While the premise is interesting, the story’s delivery stumbles. Additionally, the book is marketed as “extreme horror” but does not deliver on this promise through the first three quarters of the reading. For fans of Shaw, it is still a must read, but novices may be better served by picking up some of the author’s other novels. 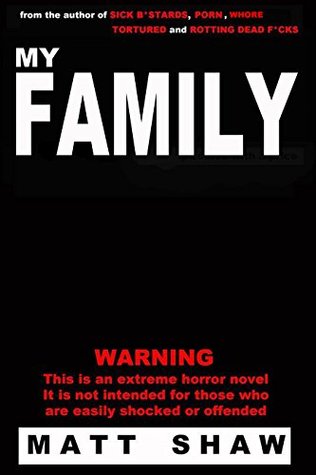