The apocalypse can come in many forms. In recent years, both the nuclear and zombie holocausts have gained ground. However, there are other forms, including the ecological apocalypse. It is Gaia Hypothesis pushed to the extreme. Earth is a self-regulating organism always trying to find equilibrium. Humans have destroyed that balance. Now, Mother Nature rises to destroy the humans.

This is to some extent the overarching theme of Laura Cooney and L.L. Soares new novella, Green Tsunami (with some added cosmic terror elements). Yet, the book is not necessarily an ecological warning about human depredations on the environment. Like so many modern jaunts through the apocalypse, emphasis is placed on the human element. The event simply serves as a lens to explore the relationships people make with one another.

In Green Tsunami, a gigantic wall of green slime has washed over the earth. Most have died and those who have survived have become horribly mutated. Moreover, the lines between inorganic and organic organisms have begun to blur, with houses and cars taking on elements of living creatures. All of this appears to be part of larger ongoing metamorphosis, but to what end?

The story is told through a series of emails between two survivors, a husband and wife. The couple was separated at the time of Green Tsunami. The husband was at home and has awakened to find his foot horribly mutated. The wife was at work and now serves the Balloon Heads, cranially deformed mutants with limited psionic abilities.

Their son was a monster before the green wave. His compunction for torturing animals and threatening others with a knife had placed him on the path towards serial killer before the event. Now, after the Green Tsunami, he really is a monster. With the body of centipede and a hunger for flesh, he devours any that remain on this alien landscape. The couple must come to terms with their son, the monster he has become, and the monster he has always been.

In the Green Tsunami, it is the setting which shines above all else. Infinite decimally complex and nuanced, there is a lot to absorb. In addition to the deformities and animal-human hybrids, there are plant-human hybrids, the living buildings and cars, as well as new forms of insect life. All of which is changing as the novella progresses.

It would take several compendiums to explain properly. No concerted effort by the authors is made to do so. Hence, the book feels to some extent disjointed. Those who expect an ending where all aspects of the narrative are explained away are setting themselves up for disappointment.

This said, the conclusion is surprisingly satisfactory. It is a true end. While other stories can be written in this setting, the story of these particular individuals is complete.

The artwork is also worth mentioning. In an age where most stories are lucky to receive even an exclusive commissioned image for the cover, Green Tsunami is fairly well illustrated with not only amazing cover art but numerous images throughout the book. Artists which contribute to the novella include Daniel Verkys, Ju Kim, Will Renfro, and Justynn Tyme. All of the imagery functions well to pull the reader into the unique setting developed by Cooney and Soares.

Whether you like or dislike  Green Tsunami will largely depend on your point of view. The human element and story between these three individuals is there. It is a setting that will alienate some readers. If you like your stories to be complete tightly wrapped bundles built upon logic, this is perhaps not the book for you. However if you are looking for elements of the fantastic and don’t mind the unexplained, check it out (right here). 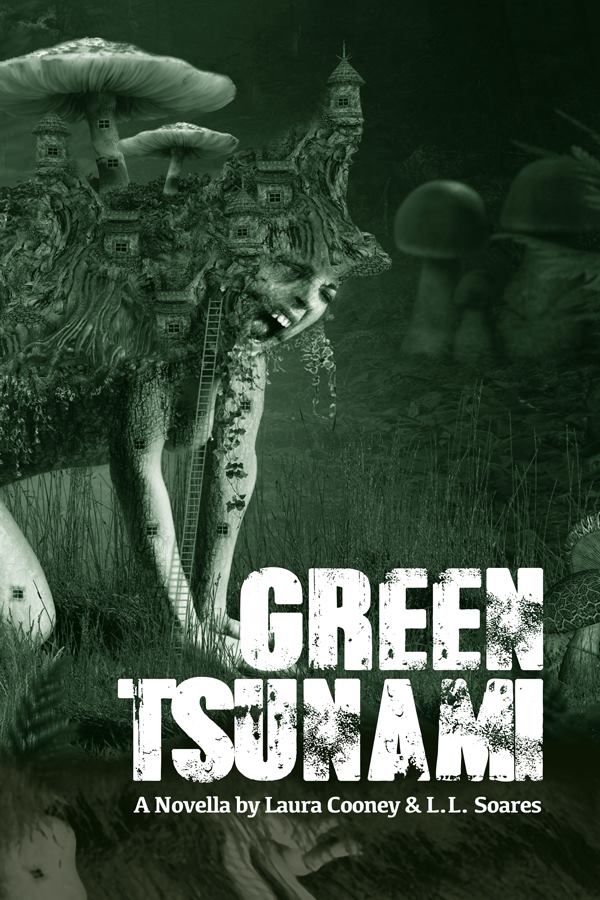