Richard Farren Barber won our When Red Snow Melts competition. He’s also written some great stories. His forte seems to be connecting on a very human level with readers, and thus far it’s served him well. As his career continues to grow and evolve, we want to follow. So, kudos to John Wisniewski who had the smarts to corner Richard before he’s far too commercial to share a few moments with little old HNR. 🙂

Check out the full interview below, it’s a fine read that really showcases how thoughtful Barber is.

John Wisniewski) When did you begin writing, Richard? Did you write short stories in the horror genre?

Richard Farren Barber) I started writing in primary school. I have a clear memory of sitting at home and writing a story – I even remember the name of it ‘The red cherry’ and the plot (an Enid Blyton type fantasy where a group of children eat the fruit from a cherry tree and are transported to a magical land.) and feeling very proud of myself that it was over two pages long. I stopped writing when I reached secondary school, for no reason that I can recall, and didn’t start again until I was 18 and I was at university.

That time also coincided with my rediscovery of horror. I’d read a lot of horror when I was younger but then switched more to 1950s hard science fiction. At university I bought Stephen King ‘s The Dead Zone and that was it, I was hooked. I spent every free moment trawling through second hand bookshops for Stephen King novels and Pan anthologies. And I started writing again.

I began with short stories, mostly in the horror and science fiction vein, but during the summer break after my first year I decided I would write a novel. It was a very conscious decision, just to see if I could do it. My first attempt reached about 25,000 words before I floundered, so the following year I tried again with a different story. This time I managed to reach the end. By that time my writing had taken a strong bias towards horror so it was natural my novel would be in that genre too.

JW) Whom are some of your favorite horror authors?

JW) Tell us about writing “The Sleeping Dead”, Richard. What may have inspired the novel?

RFB) The drive behind ‘The Sleeping Dead’ comes from the clash of two observations. The first was a series of suicides in Bridgend in Wales some years ago. The reporting suggested that these events were linked. I carried that in my head for a long time and then more recently I listened to a podcast which discussed the way the media now has guidelines concerning the reporting of suicides by celebrities as it has been found that the way suicide is reported can create copycat suicides.

The two are unrelated but my imagination made the connection – what if suicide is contagious? And what would it be like to experience that – where people killed themselves and you didn’t understand why.

For me, each suicide is individual. Everyone has their own reason. The horror for me goes beyond the loss of life, it’s the need for those left behind to try and understand something which will always be a mystery to them.

JW) What do you find really scares the reader of horror novels?

RFB) For me, the essential element in scaring a reader is empathy. The reader is unlikely to be afraid of a hand reaching out of the book and grabbing them by the throat, so it isn’t personal jeopardy that’s effective. They need to be afraid on behalf of the characters within the story, and that means believable characters. Having a character that behaves in a way that the reader recognises is critical. If I can make the reader care about what happens to the characters then I’ve got them hooked, if they don’t care and don’t invest any personal emotion then it’s going to be nigh on impossible to make them feel anything, however much blood and guts I throw at them.

RFB) Here’s the thing, I don’t tend to watch television or films a great deal. If you asked for a list of favourite horror novels we could be here for the next couple of hours and I wouldn’t need to draw a breath, but films…

I have seen some horror films, actually probably quite a few, and in fact I would argue that watching The Dead Zone was the cornerstone of my love of the horror genre, but that love only really exploded with books.

That said, I can pick a few: I remember being terrified by the Charlton Heston film ‘The Omega Man’ when I would have been about 8. I loved Ghostwatch which may not be technically a film but was very, very clever. I loved Poltergeist and more recently ‘The Cabin in the Woods.’

JW) What is most important to you in creating an alternate or unreal world through your stories, to scare the reader?

RFB) I tend to work within a world that is recognizable, with just a tweak to the usual rules to take it into another realm. So, for example, ‘The Sleeping Dead’ is set in our contemporary world but where suicide is contagious. Making that slight adjustment allows me to tell a story in a recognizable location which I think adds to the effect.

I am fascinated by the amount most of us don’t know about our own world, either because it never crosses our existence or because we choose to ignore it.

It often strikes me that two people can have different experiences of the same event or location. I like suggesting that whatever is happening in my stories could be true in our world for some people, and it’s just a street or a wrong phone call or an interview away from happening to the person reading my story.

JW) What is the best horror story that you have read, Richard?

RFB) The best horror story? Just one? That’s a really, really tough ask. For me different stories are ‘best’ for different reasons, so I would have a range of best stories.

Although perhaps not traditionally considered horror I would say Steinbeck’s ‘Grapes of Wrath’ is probably the most horrific story I have read. I’m not ashamed to say it made me cry and I think it takes a truly great writer to achieve that level of emotion through ink on paper. 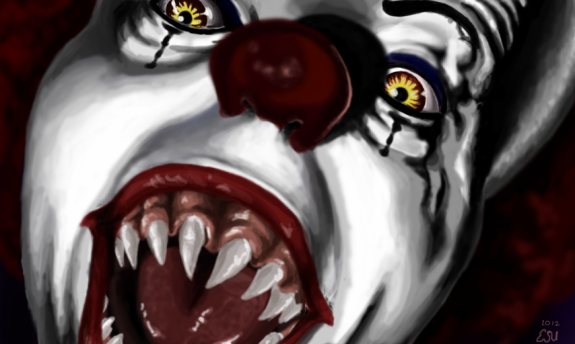 A more traditional choice would be Stephen King’s ‘It’, another story in which the characters are so well developed that they become real.

My last option would be a short story collection I read when I was about 8. It was actually a library book one of my sisters had so I don’t know the name. Amongst the stories was one in which a printer explained how he had substituted the final story in one book because he’d had a bet he could kill someone after warning them, and yes… that was the book I was holding 36 years on it still gives me the shivers.

JW) Do you have a favorite among your short stories and novels, Richard?

RFB) I have a couple of favourites. I should probably say it’s the story I’m working on at the moment, and there are definitely a couple of stories in the pipeline that I really, really like… if I can just get them to work.

Of my published work, I’m particularly proud of my two novellas – ‘The Power of Nothing’ and then ‘The Sleeping Dead’. I feel I had to grow as a writer in order to develop them. With my short stories I have a real fondness for ‘Paternoster Blues’ as it was my first acceptance by a genre. There are a few other short stories, including some that haven’t yet found a home. I think at times my viewpoint is biased because there are some stories I have a real affection but which don’t seem to catch the attention of editors.