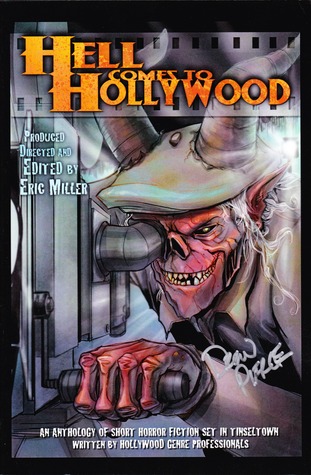 Working as an active film journalist as well as novel critic, I found Eric Miller’s, Hell Comes to Hollywood anthology superbly gratifying and with a doubt, directly up my alley. This collection combines two of my greatest passions, and getting the chance to cover it proved both rewarding and memorable. I love the book, and I’m sure as hell not likely to forget it anytime soon.

Pleasantries now directly dismissed, I often find covering collections a bit challenging. How do you adequately issue credit to all due parties without crafting a 5,000 word review? No one wants to read a critical piece that stretches longer than the majority of stories featured in the subject of scrutiny and praise. In the case of Hell Comes to Hollywood however, the task isn’t quite so daunting.

There isn’t a single tale in this 300-page thematic collection that I didn’t genuinely enjoy. Each story offers something a bit different, yet each casts the recurring setting – Hollywood, obviously – as a prominent plot point. Whether dealing with the sinister mind of an overly ambitious and homicidal screenwriter, a struggling actor whose greatest fear is success or a mysterious woman with the ability to exchange brilliant writing for a bit of… flesh, it all goes down in Tinseltown, and it’s all gloriously disturbing.

I found it rather intriguing that a simple “Fade In” and “Fade Out” note to signal the book’s launch and conclusion almost add a wraparound feel to it. Obviously that doesn’t qualify as a wraparound story-piece, but it adds a little something special… reading “Fade In” almost felt as if the lights had begun to slowly dim as the curtains peeled back in opposite directions revealing a screen, momentarily flickering as the projector sputtered to life from the control room. But this is obviously no cinematic experience, it just somehow carries that sensation.

The experience is a little… uncanny, if you ask me.

Hell Comes to Hollywood is a quick, smooth read that offers a little something for everyone. The anthology’s major winners are Andrew Helm, who crafts the perverse story of self-sacrifice, Muse; Jeff Seeman’s, The Cutting Room which works a supernatural-meets-meta angle that comes affixed with some grotesque imagery; Pool Boy, Ann Lewis Hamilton’s story of an attention seeking dame who draws the attention of the wrong individual; The Legend of Sleepy Hollywood, which is an outright blast loaded with a charming cast of Hollywood icons and a dreadfully bleak yet simultaneously humorous conclusion, and C. Courtney Joyner’s, One Night in the Valley, which sees an acting career spiral to dark depths, before plunging into an endless abyss.

These are fantastic pieces of fiction that summon chuckles, nausea and tangible fear. As a complete package, Hell Comes to Hollywood ranks among recent favorite anthologies, and to be completely honest, isn’t likely to be usurped by another anytime soon. If you’re a fan of horror, delivered in any medium, this is a must-read.

You can purchase this one right here (for next to nothing) and if you happen to be an Amazon Prime user, you can grab the ebook for free! For all other info, visit Big Time Books.