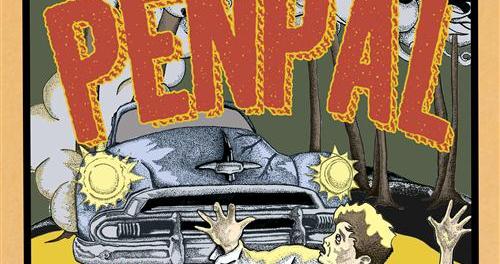 During my quest for great fiction I’ve discovered some grand slams and some embarrassing strikeouts. I’ve discovered new novelists, and become familiarized with veterans who had long evaded my attention. The insanely popular social outlet Reddit.com has proven a fantastic tool with which to share my writing, but it’s also introduced me to a few aspiring authors, and one damn talented individual by the name of Dathan Auerbach.

After checking out a few of the reviews I’ve posted here on horrornovelreviews.com, Dathan reached out to me with a personal request: would I be willing to give his novel, Penpal a look and, possibly a review? I love the unknown: therefore my answer was an emphatic yes. My decision to examine Auerbach’s inaugural effort proved not only time worthy, but insanely fruitful. This is a hauntingly rewarding novel that I’ll read again in the future.

The story, which entangles readers and seizes complete attention early, functions on a multifarious level and is assembled in unorthodox but well calculated fashion. First off, our story isn’t told in what could be labeled proper chronological order. There’s a Quentin Tarantinoesque disjointedness exercised throughout the novel, as Dathan keeps readers leaping around a wide timeline. Chapter one may focus on a six year old boy’s life, while chapter two takes followers years into the future, before the third chapter pulls the wrinkles of time back once more, to a time somewhere in between chapter one and three. The entire narrative functions under this practice, and ordinarily, this method makes for murky details and character confusion, but in the case of Penpal, the structure works quite well.

You’ll likely guess, based upon the novel’s title alone, that this story focuses on a “penpal” who isn’t exactly… normal. In fact, this distance-writer is a twisted individual with an unexplained yet potentially fatal obsession. Our mysterious antagonist is quiet, nearly invisible to suspecting eyes, completely discreet and surprisingly savvy. His intentions aren’t clearly outlined until the latter portions of Auerbach’s story, but I’ll give you this much to chew on: this guy isn’t some simple pervert with mere sexual gratification on his mind; so forget about giving Chris Hansen a call, this is one perpetrator that isn’t showing up with booze and rubbers to meet an under-aged girl. No, there’s a far more sinister plan being birthed for our story’s young target (who, unless I somehow missed it goes unnamed throughout the tale), and lifelong longevity definitely doesn’t fit into the equation.

Told from a first person point of view, readers get a great chance to climb inside the mind of a boy, transitioning from toys to romance; bikes to automobiles… a boy becoming a young man, quite simply. Constantly seeking adventure, always teetering on the brink of defiance, but undeniably kind and attentive, it’s easy to attach yourself to the exploits of this character – that possesses traits that actually remind me a bit of myself as a boy – both as an innocent kindergartener as well as maturing teenager. But a novel needs more than a singular identity to create true connectivity, and Dathan, who obviously understands such facts, introduces readers to a few fantastic supporting players, including (most noteworthy) fellow thrill-seeker and best friend Josh as well as the faceless penpal (an unsettling menace who clings to the shadows and isn’t glimpsed until the final pages of the story) of our primary personality and unsuspecting victim-to-be.

The details are at times a tad vague, which admittedly leads to some quizzical conjecture (why is our antagonist so obsessed with photography, especially when he’s taken up residence in such close proximity of his desired target?), but while a bit of murk does seep into the page on occasion, Dathan does a fine job of ironing out the majority of the wrinkles. The loose strings are for the most part tied by the final pages, save for one detail that still has me scratching my head a bit: what is the relevance of Veronica’s (Josh’s sister) position (which isn’t bestowed any focus until the story has just about wrapped) and fate in context of the grand tale, and what’s the story behind the enigmatic automobile? There seems to be some form of symbolism at work here that I personally missed, and that does admittedly crawl under my skin.

In general, the faults of Penpal are minimal. This is an eerie tale that pits pure evil against genuine innocence. Anytime an author casts a child aside, thrown to the jowls of a man-eater, the fear takes on a tangible nature. Auerbach may not yet be a household name, but if he’s got more creativity of this level tucked away in his mental corridors, genre fans have a new name to memorize.