Declan’s life is now moving in a much better direction. After the events of Paul Tobin’s first tale, our unsuspecting hero is beginning to settle down into a life that resembles normal – well, as normal as possible for ancient, ice-cold Declan. His relationship with Reece has gone full romance, and the two are living together as a couple, rather than as a caregiver and patient. Since Declan opened Reece’s eyes to The Hungry World, the two are able to deal with the things most sane people cannot fathom. But peace will not loom long for these lovers.

The Hungry World still calls, but this time it isn’t Nimble Jack who looks to disrupt their low-key existence, it’s Swivel, a menacing monster who’s out to grow a garden of craziness. But Swivel’s garden won’t grow, and it won’t grow because Declan has now made it a normal habit of healing those who are out of their mind… and insanity is the nutrients required to see Swivel’s sinister garden blossom. With Swivel’s crops dying, he sets out to eliminate Declan, the counter to Swivel’s nasty plans for growth.

Can Swivel murder Declan before his crops have completely withered away to nothing? Or has Declan finally met his match?

A dark game of cat and mouse ensues, and writer Paul Tobin guides us through this harrowing journey in brilliant fashion. Once more Tobin is accompanied by the masterful Juan Ferreyra and once more they give us an impacting book that coerces the reader into thinking a bit more deeply about the world in which we inhabit. What if there was another, grim and depressing realm, parallel to our own that only a select few could see?

The Bad Seed doesn’t deliver quite the jaw-dropping impact that the inaugural story forced down our throats and in our psyches, but it’s a terrific read all the same. I have next to no complaints about the book, and Declan’s existence, let alone story, still have me completely mesmerized. The Bad Seed is a stellar story, and I’m practically dying to jump into the next chapter of this engrossing saga. Tobin and Ferreyra are at the top of their class, and I have full confidence that any time the two venture into The Hungry World, my mind will be on little else. 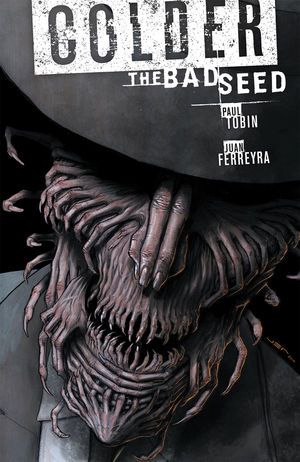