We Are Monsters, published by Samhain is Brian Kirk’s debut novel and what a debut it is. A complex telling with stories within stories, you’ll find that you can’t put it down. The horror is all too real as one delves into their past and brings up memories that rather stay hidden. But, sometimes it’s those memories that need to be faced before we can move on to our future.

“You are the harbinger of death. Only pretending to make man sane.”

Dr. Alex Drexler has been quietly working on a cure for schizophrenia, using patients under his care as guinea pigs, he hopes to one day make a name for himself. Dr. Eli Alpert is the Chief Medical Director of the Sugar Hill asylum whose approach to curing the insane differs vastly from Drexler; less medication, more therapy. Both men carry burdens, Alex with a brother who is schizophrenic and Eli who watched his wife die and can’t let go.

Alex finally thinks he hit upon the right formula and tries it on his brother, but things go awry rather quickly. In the meanwhile Philax Pharmaceuticals who is banking on this miracle drug wants to move forth with it, and damn the consequences. Things come to a head when Philax calls for a meeting with some of their reps, Doctors Drexler, Alpert, and a social worker named Angela, who has managed to bury years of abuse from her childhood. Philax wants a demonstration of the drug and choose criminally insane Crosby “the Apocalypse Killer” as the test subject.

Something goes terribly wrong. The medicine alters Crosby’s mind and drags him and all in attendance into a parallel plane where they must face their inner demons. It’s here where each will fight the monsters within. And, as the old saying goes – Only the strong shall survive.

This is a well told story; you really get to know your characters and even sympathize with those you once disliked. I can’t praise this book enough! Pick up your copy today, here. 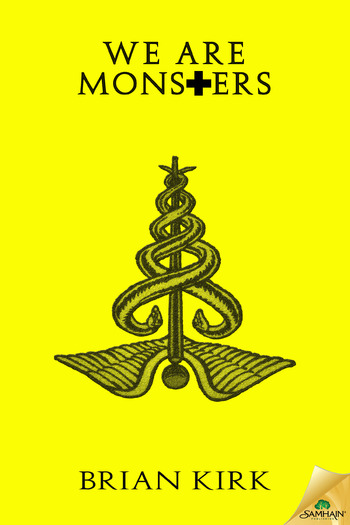