“When is a sound more than a sound? When it has the power to make you cut your own ears off….”

More than a few readers of weird fiction were waiting with baited breath to see how the enigmatic Josh Malerman intended to follow-up his scintillating 2014 debut “Bird Box” which was one of my favourite horror novels of recent years. If you haven’t read it you seriously should – something in the light turns everyone bat-shit crazy with this terrifying tale focusing on a group of survivors hiding out in a house scared to go outside unless blindfolded. It’s a totally unique twist on the post-apocalyptic novel which has levels of tension rarely, if ever, with a lurking invisible enemy. Although Malerman has since teased us with shorter fiction and the entertaining and melancholic novella “A House at the Bottom of a Lake” what I really craved was the second novel. So this was a book I read with great excitement and trepidation…..

“Black Mad Wheel” is, in its own crazy way, just as bat-shit as “Bird Box” and although it never truly reached the heights of Malerman’s debut it was a highly imaginative, complex, mind-bending, bizarre read which showcased the wild ideas of an author truly in the zone. There aren’t any comparisons to be made with “Bird Box”, Malerman is too fine a writer to rehash his earlier work, however, structurally there are powerful similarities. Both novels have two distinct timelines, featuring the same characters, almost meeting at a point which jigsaws the plots convoluted timeline. This worked great in “Bird Box” and does so equally well in “Black Mad Wheel” as both timelines help balance the plot tremendously well.

The novel opens with a guy in a hospital bed who has broken almost every bone in his body and has been in a coma for a number of months. We find out that Philip Tonka was exposed to a sound so powerful it had capabilities of breaking bones, overpowering minds and even making guns and weapons permanently malfunction. This sound has been discovered in a remote African desert and the military recruit Philip and his band ‘The Danes’ to go to Africa to investigate thinking that musicians might be able to solve a mystery the military cannot. Set in the 1950s, ‘The Danes’ were a band who played to the troops in the war and have since had a couple of minor hits, but are far from household names. So the story flirts between Philip with his bandmates when they take the cash to go to Africa with the second strand concerning the aftermath of hearing the sound in its full unadulterated dangerous glory.

Nobody does weird like Malerman and as Philip Tonka begins to heal mysteriously quickly, so speedily in fact, his Nurse Ellen begins to suspect that the shots she are giving him might be something more than painkillers or vitamin C. As the sound begins to play a bigger part in the novel, Malerman’s descriptions of this weird noise are so enticingly overpowering you almost feel the sound whispering out of the pages of the novel….. The whole book is a trip. Of course, the author is a musician himself and this is a very, very musical read layered upon a vast and complex government conspiracy to harness the sound and its out-of-this-world properties. Poor Philip Tonka and his band are mere pawns in a much bigger endgame.

Much of this bender of a mystery centres upon the memory loss the recovering Philip experiences whilst in hospital. What really happened in Africa?  Simultaneously, the top military brass try to manipulate the damaged Ellen into subtracting the secrets buried deep in his subconscious. Along the way, we the readers, are also desperate to find out what happened to the other members of Philip’s band ‘The Danes’. As both story strands head deep into the Namibian desert the mystery gets, deeper, nuttier and stranger by the page as it crosses genres and as novels go is pretty hard to clarify or categorise. One Namibian local who heard the noise cut of her own ears – so the sound they are seeking really is not pleasant…..

We studied “Bird Box” in a reading group at school with a big bunch of teenagers, they were split 50/50 on whether they liked the ending. The negatives felt they deserved to find out more of what ‘it’ really was. Some readers may well feel the same about “Black Mad Wheel”, questions are answered, but you may well be finding yourself reading the same few pages over and over again to try and figure out what the hell is going on.  Fiction is meant to be challenging and this hugely creative book is that and much more. 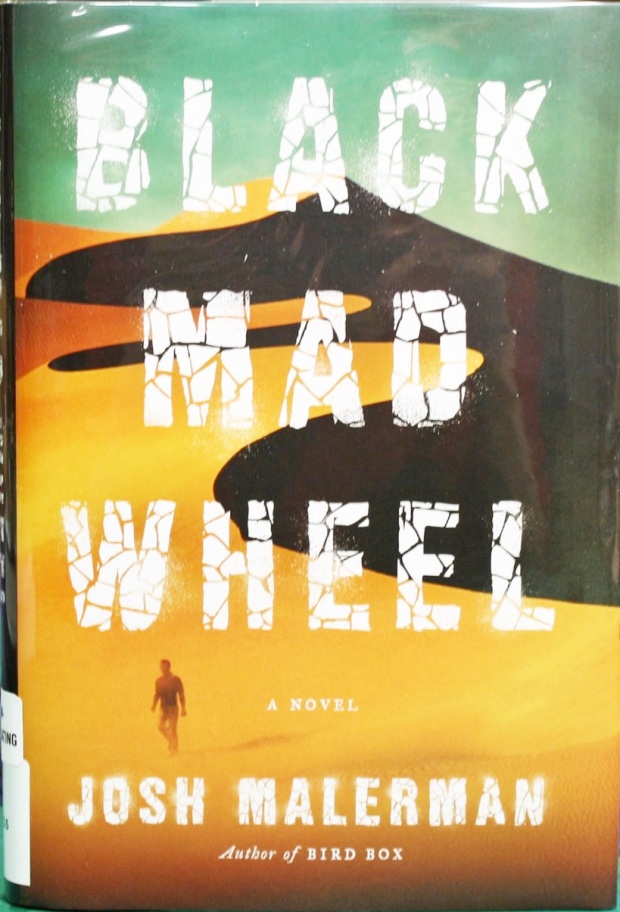