Film noir and Universal monsters. Those are two things that tickle me top to bottom. It’s probably easy to understand why I was insistent on reserving enough time to read P.J. Thorndyke’s absolute wicked novel, Curse of the Blood Fiends.

Now, it took me roughly 90 days to read Josh Hancock’s The Devil and My Daughter, and it’s a damn fine novel written by a fresh mind who approaches the novel in an entirely unique manner. I love Josh’s stuff, so the fact that it took me three months to get through it (do keep in mind that in addition to working, and trying to continue building Horror Novel Reviews as well as Addicted to Horror Movies and Best Comic Books into larger web presences, I’ve also got a teenage daughter and two baby boys to keep an eye on; my schedule isn’t exactly open) really hurt me a little on the inside. I vowed to read the next novel I picked up within 10 days time, and somehow, I managed to get through Curse of the Blood Fiends in eight days. At this point in time, I’m very pleased with that. Of course, I held on to this puppy all damn day for a few days, sneaking in a few pages at every opportunity. I guess that persistence paid off… I’m just glad I got lucky in choosing a stellar novel.

One might expect – just by looking at the novel’s cover design and judging the novel’s title – that Thorndyke’s novel is on the goofy, or campy side of things, but surprisingly, P.J. plays it straight, and it totally works!

The story (I’ve got to watch what I say, as I could ruin this one in a hurry) isn’t too complex, but it is heavily layered, as Thorndyke introduces readers to a good half dozen characters worthy of investing in. Each character, whether they know it or not, are destined to collide in an explosion of bloodshed and broken bodies. But here’s where it takes a cool turn (again, I’m not going to spill the details of how the reader reaches this destination), vampires and werewolves are tearing through the citizens of Los Angeles at an alarming rate, and the only way to stop them may be to unleash an army of something potentially more dangerous than the suckheads and the lycanthropes. Can a female private investigator, accustomed to defying the odds as a woman in a role typically reserved for tough guys, not just survive, but bring an end to a monster outbreak that threatens to swallow southern California?

The love and respect that Thorndyke injects into this crafty little tale is admirable. It’s very evident that we’re dealing with an author that has a love for both vintage monsters and period pieces (this story takes place in 1942). Thorndyke’s bid to merge film noir and legendary monsters works really effectively, and though the story is nearly devoid of the over-the-top humor I’d anticipated, I’m glad this one isn’t half as outrageous as I’d predicted. The fact that Thorndyke cuts down on the trashiness one might expect from this piece actually creates an interesting and magnetic vibe. This was a labor of love, not a cheap hook to yank down book sales, exclusively.

Expect some awesome characters in unconventional positions, like the studly, homosexual wolfman, or the aforementioned private investigator, Rosa Bridger. Expect good, consistent action that often works to propel the story forward in a natural manner. Expect to just have a lot of fun identifying what monster villain of the big screen (most of which were dropped into the lives of fans by Universal Studios damn near a century ago) each character represents, because there are some obvious nods, yes, but there are a few that are just a tad cryptic. And finally, expect to have a hell of a good time reading this novel. It’s fun from start to finish, and if you like old movies, or even the idea of stepping back in time for a trek through L.A., then Curse of the Blood Fiends is for you. 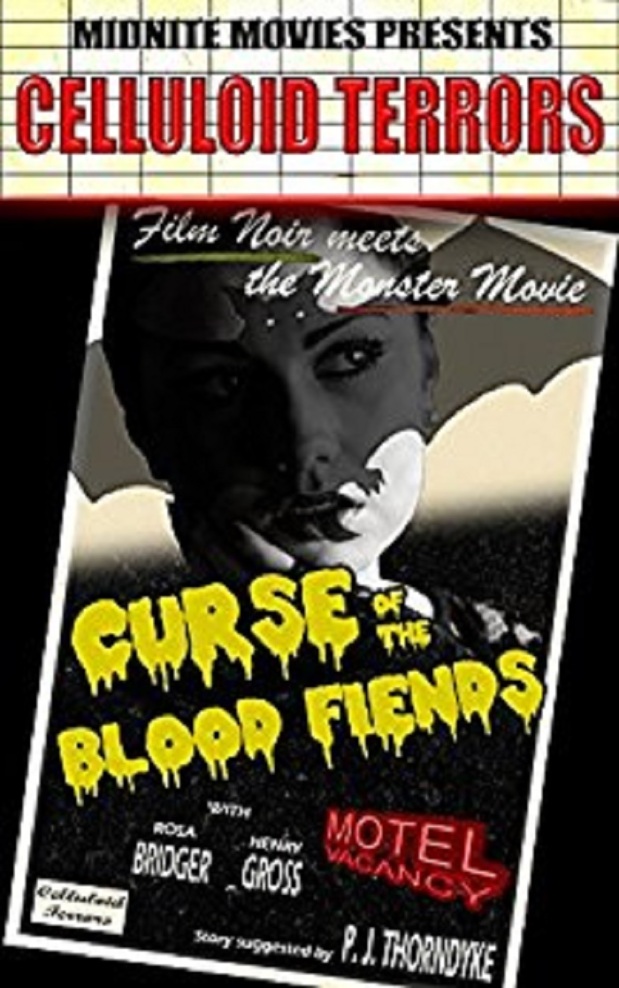 3 Comments on P.J. Thorndyke ‘Curse of the Blood Fiends’ Review