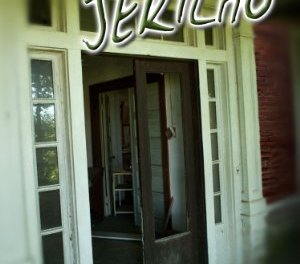 With this being Mental Health Awareness Week, I thought it would be a good time to review Finding Jericho first published in 2012 by Dave Jeffery. The author of Necropolis Rising and the Beatrice Beecham Series to name a few, plus many short story contributions, Jeffery has worked in the mental healthcare field for over 20 some years so I think he comes from a very good place to write this story.

As I’ve noted before in past reviews, horror wears many faces, it isn’t just about things imagined, it can also be the reality of one’s existence. Mental illness like horror can take on many faces. Not everyone can be diagnosed, cured, and sent on their merry way. For some and their families, it’s an ongoing battle to achieve a balance in which to exist. For the uninitiated, a story like Finding Jericho offers some insight on what it is like to be or to love someone that spends their life fighting off the demons of mental illness. For someone like me that loves a family member who has been and still is in the fight, this book offers a little reassurance that all is not in vain.

15-year-old Jon Dupree and his mother have had their lives turned upside down. Jon’s step-father has passed and to make ends meet, Jon’s mum decides to combine households with her brother Ronald. Moving away from everything he knows, Jon is a bit reluctant to start fresh in a new school but is willing to give it a go. What he didn’t realize is that His Uncle’s reputation would make his life miserable.   You see, Ronald suffers from bi-polar affective disorder. Kept under control while on meds Ronald can function near normal, but the problem with meds is that they can often dull the brain and leave one feeling a bit dead inside. So, a vicious circle begins.

It’s a small village where they moved and once the connection between Jon Dupree and “Raving Ron Dupree” is made the tormenting begins. Jon is becoming increasingly resentful of his Uncle’s disorder and when it finally comes to a head one explosive night Ronald is back in hospital care. With Jon’s mum preoccupied with her brother, Jon takes on a dare by the school toughs to prove himself and be accepted.

Things go awry rather quickly and Jon soon finds himself in a near-death experience along with a ghost from the past set on making things right. With a tidy ending and some hope for the future, this book is definitely a must-read for both adults and teens. I really do hope you take the time to read this book and perhaps take away some understanding and tolerance of others. You can pick up a copy HERE!