Mister Sam Shearon’s Creepy Christmas (A Merry Macabre Coloring Book) isn’t just some sloppily illustrated likeness to a fat man in a red suit returning page after page to be humiliated by juvenile hands and minds with dime-store crayons. What the book actually offers is 40 crisp, creepy and absolutely infectious illustrations. These are stunning images, and plenty will feel nice and familiar, as Krampus, Wendigo, demented Christmas carolers and evil Snowmen are but a few of the iconic figures to appear in the book.

But moving away from the stunning artwork (not that I want to; I could gaze at these beauties day in and out), it’s impossible to ignore such an impressive lineup of poems included in the book. There are still a handful I haven’t read as of the time of this writing, but just about every last piece I have taken in has been stellar. Shearon is a whole hell of a lot more than a bad ass artist, he’s an impressive poet, to boot.

Among my favorite artwork and poetry featured in the collection are the drawings of “Past, Present and Future,” “Toys,” “Candy Pain”, “Krampus” and the opening illustration, and the poems “The Abominable Snowman,” “Wendigo,” “Rabid Rudolph” and “Krampus.” Between the art and the refined poetic prose I can only find it in my heart to sing praises for this masterful Christmas themed treat.

I fear it may be too late to order this one and get it in time for Christmas, but I would implore you to try. And, even if you see this one land in the mailbox a few days after the official holiday has passed, believe in the quality of the book and my very honest assessment, because whether Santa’s stuffed his obese self down our chimneys already or not, you’re going to have a complete blast both reading and coloring it.

Even I – who, with a cramped freelance writing schedule, a wife and three kids, has hardly enough time to catch a single breath – managed to get a little bit of coloring done (to be completely honest, this is the most coloring I’ve done in probably 25 years). See for yourself below. 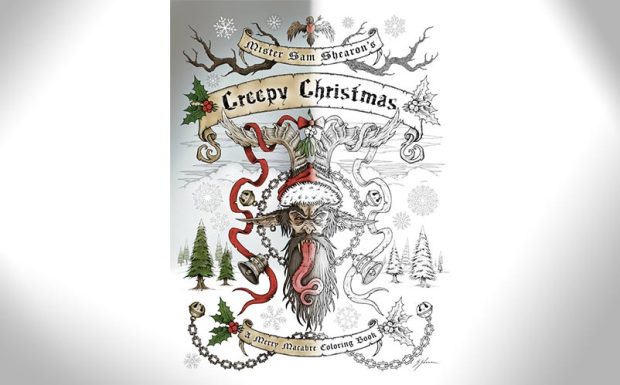