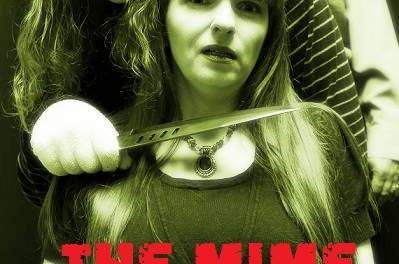 Ryker Jenkins is absolutely ordinary. He’s up at 6 am most days of the week and walks to work at the meat packing plant where he grinds meat into hamburgers, sausages and lunch meat. He’s not married and his everyday life is not exciting. But, like some people enjoy Comic-Con or the circus, Ryker looks forward to fall and the town’s festivals every year. He’s never told the people he works with that he performs as a mime with two friends. The anticipation of the fall season, putting on his mime make-up and clothes and the actual performance is how he enjoys life. In fact, it’s his one pleasure in life.

This is the year his ordinary life and luck changes. His friends are menaced by a group of young thugs led by Jay. The ensuing fight gets vicious. Ryker manages to get his hands on the leader’s knife, who in turn shoves him into a woman walking past with her daughter. Cadet Patrolman Romero and the thugs both chase him and the thugs catch up with him first. The thug’s leader, who believes in violence and brutality, beats Ryker and forces his few groupies to stab him, just because he can. As if breaking Ryker’s bones weren’t enough, Jay carves the mime face into Ryker’s skin then forces Ryker down into a sewer to rot and die. It is while he is lying there, broken, that Ryker realizes that no matter how mundane and boring his life is, it is still better to live than to die.

However, Ryker doesn’t feel that it is better to live after the entity that lives in the sewer crawls inside him and wears him as a second skin. He feels it start to enter but his broken body has no ability to stop it. Like the original snake, it whispers in his ear: “You’ve created while others have only taken…Wouldn’t you like for them to suffer?”.

Juxtaposed to this is Officer Romero. Also up at 6 am every day, he also worked as a grinder in the meat packing plant and he also loves the fall season and the festivals in town. The difference is that John Romero doesn’t count the days till he can enjoy the fall festivals. He’s a man who has planned the police force as a career and he has a wife. He enjoys getting up every day in anticipation of the new things that the day will bring.

Ryker is not dead. He is broken, but very much alive and trapped by the creature inside him. He watches helpless and horrified as the creature ruthlessly stalks, kills and eats random people. To make the point that Ryker is helpless, the creature walks him to the grinding machine at the meat packing plant and puts his hand into it. In witnessing the horror of it Ryker  screams, but only in his mind. There is no pain. The hand reforms before his eyes. The creature chooses to tell Ryker that it is its own DNA reforming the hand. Ryker’s final descent into madness comes when the creature tells him they will be together as long as it is attached to him – taking revenge on everyone and their children until the end of time. Ryker has been transformed into The Mime.

The present day opens with the current Chief of Police, John Romero, realizing that the song “Burning For You” has played on the radio on every bad day he’s had since he joined the force. He takes a night drive to the park where the festival used to be held and is sure that he sees the Mime, looking impossibly crisp in his 30-year old mime clothes, but with his face horribly scarred.

Meanwhile, the little girl whose mother was stabbed, Samantha, is all grown up. She’s basically housebound, but for once she’s out with friends when she hallucinates that she sees the Mime’s gloved hand.

Ryker is still trapped inside his own body, several degrees past insane as he has watched, unable to do anything about it, while the creature killed and fed for the past thirty years. The creature wants to kill Chief Romero and Samantha for its own twisted reasons. Ryker doesn’t understand and doesn’t agree, but he knows that he is powerless to stop it.

Some of the story doesn’t hold together when you really look at it. For example, the little girl, now grown up, knows where Police Chief Romero keeps his secret office. No one else even knows that he maintains this office. Secondly, Ryker is supposed to be completely insane, yet sometimes he’s quite lucid. So – don’t look too closely. It’s a slasher story that you should let flow over you. It will absolutely keep your attention.

My only complaint is the formatting. Paragraphs have inexplicable spacings where none should be. Don’t know if this is due to poor proofreading or to the ebook form. Oh, and thanks to the author for the cake recipe. A little too much butter and eggs for me to consider making it, but it sure sounds like a winner.