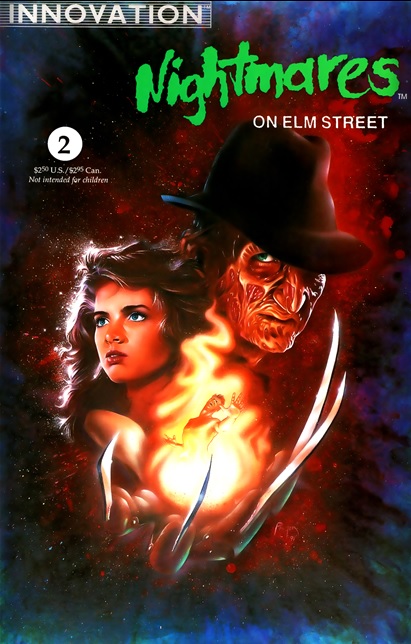 Issue number two of Innovation’s run wastes absolutely no time in ensuring readers understand that Nancy is indeed alive. And that makes for a brief but pleasant reunion with Cybil. Now there are two strong willed young ladies set to take on the menacing Krueger, which is certainly better than one.

But, just as we were investing in the idea of two heroines, Nancy brings us all back around to reality, informing Cybil that they’re still dreaming. Nancy no longer walks the earth as a living, breathing hottie, but she does exist in a strange dream realm she refers to as the “Beautiful Dream.” So, regardless of Nancy’s physical passing, it sounds as if she’s been developing something capable of thwarting Freddy Krueger, in a dream state. It’s an interesting idea, I’ll say that, and it leaves some gaps for creative decision making.

Roughly a third of the way through the book and we’re all trapped in a dream state, Freddy’s power makes all the difference however, and it takes but moments for the trio to take a trip directly out of the “Beautiful Dream.”

One of my small complaints, you’ll note was the fact that Cybil randomly fell into unconsciousness, but this book clears everything up for us by backtracking and explaining that she didn’t just collapse, she was actually pulled into the other realm by Nancy. It makes sense, and it’s something we’ve seen from the film franchise, as well.

Neil is lingering in Cybil’s place when she comes to, and the two realize that they’re going to need to work together if they truly hope to put an end to Freddy Krueger. Neil, for the record, looks rather pleased to know that somewhere, somehow, Nancy still lives. Naturally, he plans to use his hypnotizing skills to take himself as well as Cybil back under in order to save what’s left of Nancy.

We take a few minutes for something of a reunion before Nancy breaks down her existence in the “Beautiful Dream.” In these moments we learn that Nancy has basically become God to Freddy’s Satan, and the reason that a few of the surviving individuals from the medical facility have survived for one reason only: Nancy’s been protecting them. It all makes Nancy – an already likable personality – so much more likable.

The fading pages of issue two feature more dream world battles, as Nancy guides Neil and Cybil into an existence much more pleasant than the one Freddy prefers. But, of course, Freddy follows along, and it proves to be his undoing, for the time being. The souls of his victims lash out and render Krueger all but useless… or have they?

1 Comment on Paying Nothing, Loving Every Bit of Marvel and Innovation’s ‘A Nightmare on Elm Street’ Comics!