James D. Schumacher III and James Burton are on the cusp of seeing their riveting graphic novel, Inheritance: The Binding of Three arrive on April 15th courtesy of Outpouring Comics. The book, which features an insanely promising premise, stunning artwork and some compelling promotional goodies will no doubt ignite interest from genre fans, especially after getting a look at the wildly impressive trailer for the book.

From the press release:

Creator James D. Schumacher III has unleashed Volume I of Inheritance: The Binding of Three. Working with graphic artist and co-creator James Burton, Schumacher has crafted a chilling tale combining a unique blend of abject horror and the very human struggles of coping with terminal cancer.  Volume I of The Binding of Three is available April 15 on Outpouring Comics as well as retail locations around New Jersey, Salt Lake City, and California.

Check out the book’s official trailer (we’ve also got a look at the book’s cover) before you pre-order Inheritance: The Binding of Three right here, through Outpouring Comics.

Synopsis: Inheritance tells the story of Serling Normandy, a motorcycle mechanic who recently committed his terminally ill mother for severe schizophrenia and hallucinations.  Suffering from his own growing delusions, the same his mother has claimed to see his whole life, Serling decides to confront the insidious family secret – his long-deceased evil great-grandfather, Walter.  A man so vile and hated that even in death he still conjures fear and terror amongst those who remember him.

Delving into his family’s insidious lineage, Serling unleashes Walter, who returns to the world hellbent on eradicating the last remnants of his family: Serling and his mother, Bean. Can Serling save his mother’s life and his own soul or is it too late? 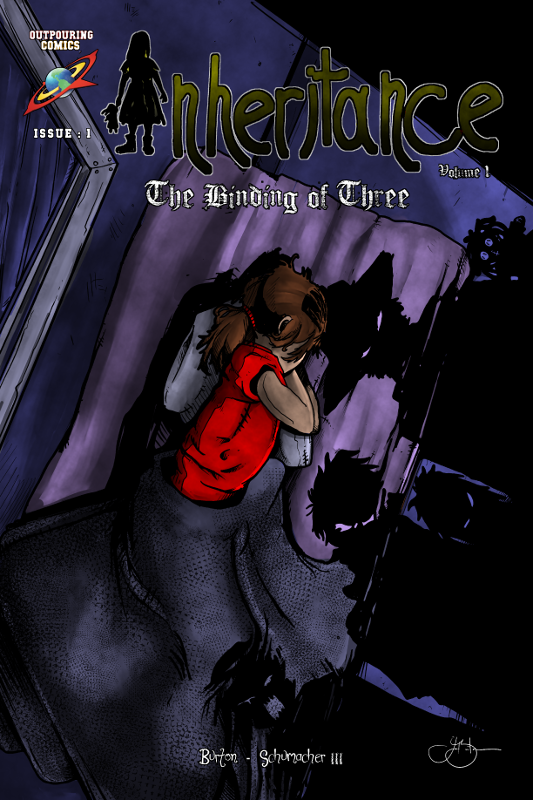