Currently, my bookcase is running over with horror comics and graphic novels—everything from 10 hard-backed volumes of The Walking Dead to reissues of Tales from the Crypt and The Vault of Horror. While these macabre masterworks have provided many hours of joy and playful terror, none of them has actually scared me or made me feel like I was watching an actual horror movie unfold on the page. So it was with great delight that I opened the first installment of Suicide Forest, a home-invasion tale written by Dave Baker and inked by Nicole Goux. In a market saturated with zombie and superhero stories, Baker and Goux stand out from the crowd by merging two fictional worlds—the traditional horror comic and the cinematic techniques of the horror film—and to this end they have more than succeeded.

In many ways a tribute to John Carpenter’s Halloween and Bryan Bertino’s The Strangers, Suicide Forest opens on a suburban street in the dead of night. With a full moon looming above, a masked killer stalks the neighborhood, selects a seemingly random house, and enters with ease. While this scene may seem typical to many horror films or comics, it’s the way that Baker and Goux present the narrative that makes Suicide Forest so unique. The book’s next set of panels shows a little girl sleeping in her bed—a tranquil, domestic scene. As readers turn each page, they see the same sleeping girl, tucked peacefully away, the picture of innocence. Scattered throughout her room are the mementos of childhood: a basket of toys, a stack of coloring books, a mobile of the solar system. But just as readers are lulled into a sense of complacency, the next turn of the page shocks them upright—the killer has suddenly appeared, skulking in the hallway just outside the child’s room, his baseball bat dragging along the carpet. In this way, the comic mirrors a horror film, complete with dramatic shadows, framing devices that imply characters are being watched or hunted, and stylized “jump scares” that truly startle the reader. As tensions inside the house mount and a moment of extreme brutality erupts on the page, Baker writes the story cinematically, with limited dialogue and where even the slightest variations of a character’s facial expression can reveal so much about the nature of violence and the need for survival.

While Baker provides an original and compelling story that moves the terror swiftly along, Nicole Goux turns Suicide Forest into a hallway of mirrors, where every repeated image contains minuscule differences that the reader must search for and examine. For example, while anxiously waiting for the police to arrive, one of the characters undergoes several emotional changes—from panic to frustration, from desperation to fatigue. Goux’s haunting black-and-white palette effortlessly captures all of these emotions while keeping the reader’s pulse in check, as the next strike of terror can come at any time. Suicide Forest ends with the horrific suggestion that the madness and the mayhem are only just beginning, and Groux’s sinister style works to build the narrative to a satisfying climax while at the same time leaving readers wanting more.

An experimental and immersive triumph, Dave Baker and Nicole Goux’s Suicide Forest concludes with many unanswered questions: what will become of the survivors? where will the killer go next? what does the title have to do with a madman whose methods of attack are as unforgiving and as merciless as they come? Fortunately, there are more issues of this outstanding horror comic on the way, so stay tuned to find out more.

Suicide Forest can be picked up here 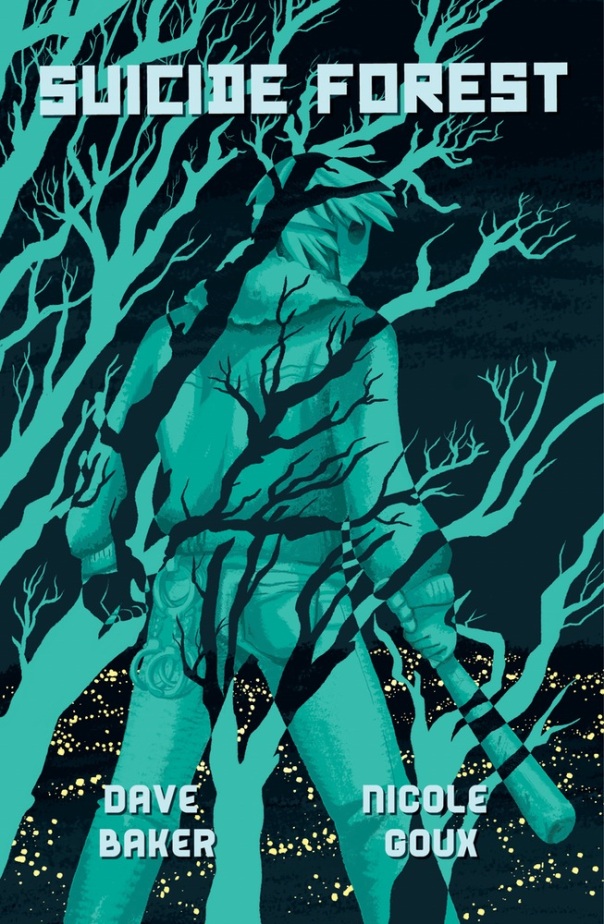