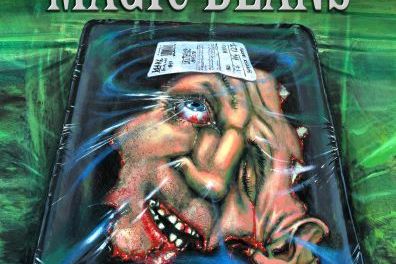 Jack’s Magic Beans is a splatterpunk novella in which the world goes crazy. Men, women, and children turn on each other. All must die in brutal and horrific fashion. Only those on Prozac are immune. They are the sane ones. They alone do not have the urge to kill their fellow man, but can they survive the onslaught?

Making those on antidepressants resistant to the madness is a fun and apropos reversal of fortunes in what could potentially be considered Keene’s most violent story to date. Much of the blood shed is centered on a supermarket where our four protagonists, Jack, Sammi, Angie and Marcel, hold up in the meat locker. However, they are without food and their pills. They cannot stay there and decide to flee leading to an abrupt and unsatisfactory ending.

Jack’s Magic Beans does not read as a complete story. It feels like the first several chapters of a much larger novel or the first in a series. The concept and characters are interesting, but ultimately there is no resolution or explanation. It just ends.

Written in 2007, it is unlikely at this point that Keene will revisit the narrative. This is a truly depressing revelation. Jack’s Magic Beans is a great story. It is only the conclusion which suffers. It leaves the reader wanting more.