So there you are. Living behind a fence with others who haven’t succumbed to the virus. Fast food on every street corner is a bedtime story told to the very young. The little older, say above the age of 10, are already scroungers and scouts. They scrounge for anything usable while trying not to get killed. They scout the areas around them looking for lone stragglers or those groups which might be friendly and open to trade.

A virus has reanimated the dead. The moving corpses that only stop moving when their heads get detached from their bodies, then have their brains burned so that the virus can’t spread. They can also die off from natural attrition, decaying and rotting, but not before turning some of the living into walking corpses. As well as guarding against zombies, the human survivors have to keep themselves safe from groups of militia and hostile survivalists. Not a brave new world, but one where people are determined to live.

Meat and his four friends, Window, Einstein and Billie-Bob set out to rescue four children who have been kidnapped from their compound by an unknown group. They are not much older than the children who were kidnapped. Meat was named by his mother who said he was meat for the new reality. Window is a very private person. Einstein is the thinker of the group and Billie-Bob is one half of a set of twins. He’s the group’s marksman.

Following the children’s trail eastward, they encounter a 10-year-old dressed in a loincloth and whose yellow teeth have been filed down to points. He speaks of the master who will kill them all. Keep him a prisoner or kill him?  The majority decides not to kill, but one of the group dissents. Meat feels his leadership slipping away from him.

On the trail, they also pick up Gregory, a grown-up, who had to bury his wife and daughter.

The place that Meat and his friends live, Bremo Bluffs, is in what used to be called Virginia. It could be a sanctuary or a prison. The outside world is dangerous and every resident has to be protected and accounted for. Or it could be because no one is allowed to leave without permission. It all depends on one’s point of view.

The boys have to survive, fulfill their task and cope with their burgeoning feelings for girls. Death and decay side by side with hope and renewal.

It may be a coming of age story and each character’s background is given, but still, all in all, it’s just another zombie apocalypse story. There’s only so much death and destruction we can picture in our minds before even that becomes boring.  So, even though it’s well written, I couldn’t give it more than a 4 rating. 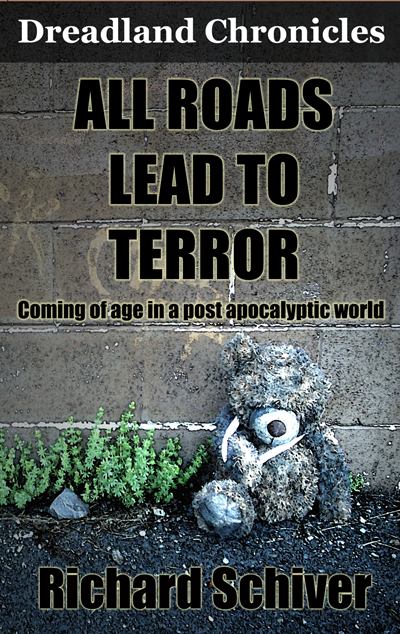 2 Comments on Richard Schiver ‘All Roads Lead to Terror’ Review