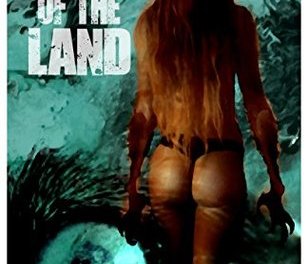 Greg Donchatz’s Wolves of the Land made me think, “Oh, right on, this is going to be like a Leon Uris novel with monsters.”

Nazis versus werewolves versus a superhuman secret agent, a premise both strong and spectacularly pulpy. Our main good guy is a throwback, a roughneck, broad-bangin’ secret agent and at the start, this book has some serious action and momentum.

There are drawbacks, certainly, but I’m not a picky reader. For instance, I absolutely loved the second Halo novel, yes, that one, the one based on the original game. That book read like a strategy guide with dialogue, half of it awful, and the other half pulled directly from the game itself.

But I enjoyed its aliens and cyborgs and lasers and, hey…stop looking at me like that…

It was full of stilted writing and bad dialogue but whatever. Initially, I felt the same way about Wolves of the Land, even with the turgid prose and dialogue that’s expository at best and bland at its worst, because the plot caught my interest.

I didn’t even mind the many spelling errors, although some were particularly glaring. (I’m sorry, but ‘layed’ isn’t even a real word. Instant red squiggly lines for that one, which makes me think, did Donchatz even run a quick spellcheck?)

However, what brings this novel’s momentum to a halt is, quite literally, Jesus Christ.

To exemplify the very worst of this book, I’ll point out a later chapter in the story when the author diverges from the plot to have Christ himself make a cameo. It has something to do with some side character’s leprosy. I was rolling my eyes too hard to make sense of the scene, or why the author chose to include it in a superfluous chapter that slows down the story’s pace.

I’m not anti-Jesus, but the story doesn’t need him. Though Christ’s appearance isn’t the final nail in this novel’s cross. (ZING!)

Likewise for the history of the werewolves, told mainly through painfully boring exposition.

This, coupled with a boring villain and a dud of a finale (did the bad guy just forget that the Nazis were capable of simply bombing his fortress, or were anti-aircraft measures out of his price range?) make Wolves of the Land sputter to a forgetful ending.

Horror writer from Philly. I enjoy beer, my dog, my wife, and fart jokes. (In that order? Let's find out!) Find me at Mackmoyer.com or just Google search "homeless writer bites police officer."

2 Comments on Greg Donchatz ‘Wolves of the Land’ Review