But there’s something to be said for a shorter, more intense experience.  It can be invigorating, sometimes even shocking, like a waltz with a stranger you will never see again, or a kiss in the dark, or a beautiful curio for sale laid out on a cheap blanket at a street bazaar.

–From The Bazaar of Bad Dreams, written by Stephen King.

The drive had required a fill-up — not that the place had been far away but I needed to waste time, so I made laps around Jacksonville’s border. I followed Interstate 10 through the west, puttered through early evening dust storms, and then back onto 95. Then I gassed up with fuel and hotdogs, and a big gulp fountain drink full of vanilla coke that tears at my throat.  It’s one of those good pains, you know? that it’s workin feeling from isopropyl alcohol on a raw cut, the muscle soreness that comes after leg-day at the gym. The sun dips early this time of year. So it’d been full dark a quarter after five.  The junk food reminds me of childhood days: breakfast and pregame meals, candy and processed meat.

The Bazaar is opening now. I finish my coke, disembark.

The air is bluish and white and struck through, by patches of night that wouldn’t be quelled: by sharp steel winds that give it a heavy and penetrating quality. The black silhouettes of wooden signs: live cars, sprelunks into worlds apart from this one, dances with the bones of bad behavior, if there ever was such a thing. The shop keepers work wistfully: some are old — and others, older still. One wears a dirty catcher’s mitt and mask – and a guy around my age dances in the moonlit courtyard: holds onto a woman who isn’t dancing back. She might even be dead. But he smiles all the same. The flesh is only an insubstantial thing.

I’ve come here for that kiss in the dark, for my dance with that no one. And The Bazaar of Bad Dreams is the embodiment of this concept: for a few reasons, of course. Because there are thrills sprinkled here and there.

Naturally, not everyone is a good dancer.

It’s an above average read, this book: the coarse handful you can expect from any collection of shorts, a nice haul of sweet and sour flavored candies. Expect what you’ve come to expect, and more than once the old shop keeper, in spite of his bad memory and fading eyesight, he’ll pull the wool over your eyes again.

The first kiss comes across from the thoroughfare: a lone mud-covered station wagon surrounded by spatters of blood. And the air seems to bend around it. The light is dirty that touches it – the stage set by this Ford or Chevy, or, who knows? And abandoned cars are situated lazily behind it on the shoulder.

He parked behind the wagon, put on his four-ways and started to get out.  Then he noticed that there appeared to be no license plate on the back of the station wagon… although there was so much damn mud it was hard to tell for sure.  Doug took his cell phone out of the Prius’s center console and made sure it was on.  Being a good Samaritan was one thing; approaching a plateless mongrel of a car without caution was just plain stupid.

I remember the old man’s caution. He takes a mouthful of beer from a labelless bottle and points at the dirtied vehicle. “Be careful, the best of these things have teeth.” I made my way across the motionless road and stopped.  A truly pitiful thing, it was. I’d been nervous only until I got there. But in the end, there really wasn’t much to see.

A good majority of my interactions had been like this: the tall tales of old man King: a deathly station wagon (Mile 81), and the wife who dies when it’s most convenient (Premium Harmony). A couple of the whispers in the night, indeed, had been poems (The Bone Church and Tommy). And the anticipation had nearly frozen me, a penetratingly cold night, and breaths of used air like puffs of silver smoke. I expected to be moved by those fingers – the woman who holds onto me as if this was the only dance that ever mattered. And she fades with first lights of dawn.

And as I let her go, I’d been stricken by a deepening, drowning, trepidation: the sickly whispers of the cold lips, threatening to reach through and take what wasn’t tied down. I amble closer, towards the light switch; and she’s gone.

I should be relieved, but I’m not.

The dominant weakness of some of these journeys, frail plot devices.

Mounds of white sand – along the collarbones of the bazaar, where on certain nights the moon dips it’s tendrils in gray ink: names in familiar handwriting. The sky opens, guts-red in the dusk. I think of my mother and the gates of heaven, and the recently dead that cross over in places like these. Because they can’t miss the sight of this gate – bleeding where currently the moon presses down coldly. Maybe the names had been written during a blackened rain, when nobody is around to see. So this is where I go next: the misspelt maiden name of my grandmother.

I was fourteen when she died.

…Every trip to the little unnamed island lying like a half-submerged submarine two hundred yards out in the Gulf began with a great and uneasy excitement.  Now there is only unease.  And pain that seems centered deep in his guts and radiates to everywhere.  But he still makes the trip. Many things have lost their allure in these shadowy later years – most things – but not the dune on the far side of the island.  Never the dune.

–From The Dune, written by Stephen King (sub-rated 4/5)

… But a few times that night, I’d pushed forward in the darkness until my lips had been stopped – a chill shuttering through me, like a warm and gently rolling breeze. I’d heard his voice the loudest then, the old shopkeeper; and it unsettled me long after I’d been gone and left the sands behind.

The old man – talk of terrible things written in the silt (The Dune) – a lover dependent on his marriage to save him, from the realities of life and death (Under the Weather), or another man, still, trying to escape his own end with new beginnings (Afterlife).  Yes, reader, these were the ones I remember well – the stories that carry you away in a deluge – somewhere personal and intimate. The tenement building that lives your greatest fears and sufferings. The people you love the most live here. And they die.

It’s the natural order of things.

Here’s what I’d learned that night, about the Bazaar of Bad Dreams – the way old man King had told these tales of human misery: a heaping tablespoon of nothings, a good selection in which he’d done what he does best – plucked the melody out of thin air.  Those voices, when the darkness grows weary and tiresome – blind intercourse with a stranger who leads the step. Who steps the same, and yet not – the way he handles the tune, gently, sprinkles it with salt and pepper and minced onions. Some of these tales, and forgive me for the flower of my word — I just don’t want to spoil it for you reader.  But there are gems here, I promise. Whether enough to make gold of your precious time, I really can’t say. 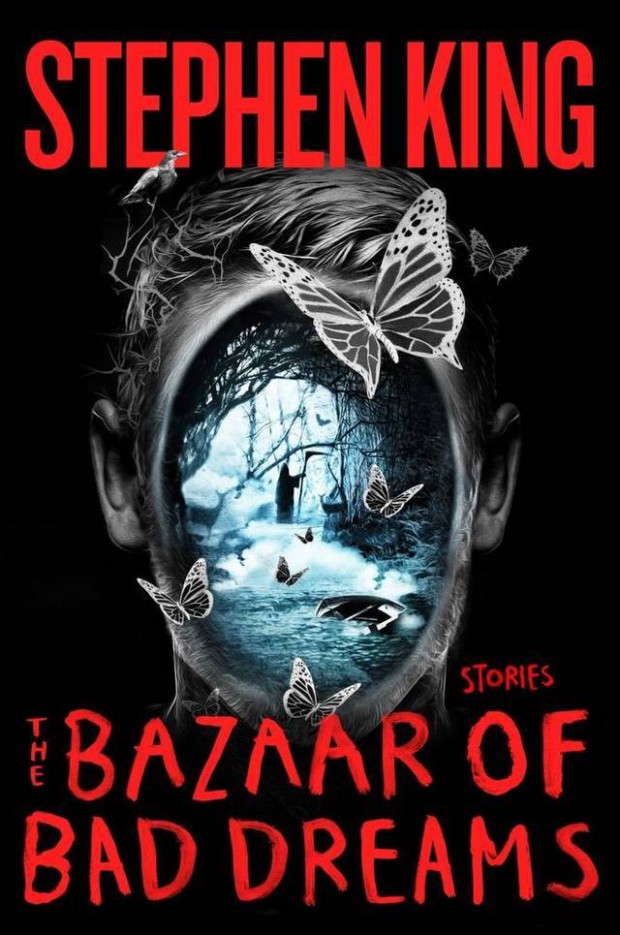 5 Comments on The Bazaar of Bad Dreams (Dreamy) Review