Dark Arts is an example of how not to do exposition. This thing reads like a fucking plot synopsis.

We’re introduced to Max who – bear with me here – is not only the leader of his rock ‘n roll band, but also hunts down occult relics, but he’s a skeptic, not believing any of that supernatural stuff, until he does, and he’s British too, as the author often reminds us, not just in his blocks of inert prose but by making sure Max calls women “luv” as much as he can.

After stealing the Necronomicon (it’s not the Necronomicon, but might as well be) from a rogue monk in a promising prologue, Max reunites with Miranda, a woman we already know he’s going to fall in love with due to the rules of fiction but, alas, we’re told several times by old lady mystics that these two are destined to be together.

Max and Miranda have no chemistry. The author just keeps telling us that they do. They also ride a motorcycle together, during which Miranda says, “My life’s in your hands,” but if that’s all it takes to fall in love then my wife would have left me for an Uber driver by now.

On to Max’s skepticism of the supernatural. It’s irrelevant, because not a quarter of the way in, Max sees a few ghosts then starts believing. Or so the author says. Max, Miranda, and one of his three inconsequential bandmates then do some sort of ritual and free the ghosts from…something or other.

I tried following this plot point, I really did. I found it boring and rudderless, though the author assures me that it was quite miraculous, his words, not mine. Max thinks so too, because there’s nary a sign of internal conflict about his sudden belief in the supernatural.

There’s the writing itself, which is competent to a degree. There are a few errors the author missed in the editing process that I overlooked, though certain inconsistencies in the dialogue are annoying. Max refers to his father as “Da” in the prologue (because he’s British!) but pronounces it “Dad” in subsequent pages.

I lost count of the background characters thrown at me in the early chapters. There’s an artifacts dealer, the three aforementioned bandmates, the love interest’s aunts, the one bandmate’s father, a shifty old guy, another old guy who totally doesn’t like the Necronomicon being around, and, OBVIOUSLY, a couple of nude hippies, and that’s not all of them.

Most of these characters should have been cut during the second draft. Many are dull at best, and I felt it was a pain in the ass to keep track of them.

“Show, don’t tell,” is probably the most overused piece of advice given to writers. But there’s a reason. Dark Arts doesn’t heed this wisdom and suffers accordingly. 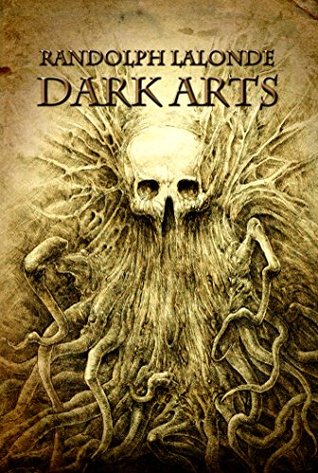 Horror writer from Philly. I enjoy beer, my dog, my wife, and fart jokes. (In that order? Let's find out!) Find me at Mackmoyer.com or just Google search "homeless writer bites police officer."