An absurdly hectic schedule has called me away from a few of the books I read frequently, and that’s a shame. Especially when one of those books is Harrow County, arguably the finest book on shelves today.

Leaping into issue number six I’m quickly reminded of everything that makes this such a magnetic read. It’s all about character, it’s all about humanity and it’s all about the darkest side of us, human beings, and our own humanity.

Cullen Bunn is still sending shivers down our spines, but he’s now begun to do so for new reasons. The unknowns of Emmy’s past, present and future are no longer the things that leave us so greatly unsettled, as we’re now getting the chance to truly meet Kammi, Emmy’s twin sister.

While Kammi looks like Emmy, and sounds like Emmy, she is in truth, nothing like the innocent young woman we’ve come to recognize as a haunted but pure spirit. She is the creation of the long-deceased with Hester Beck, but she isn’t interested in the black magic that Beck so favored. She just wants to live a life that resembles normal. She wants to be a young lady.

Kammi wants to embrace her roots.

She’s not only curious, she’s fully in tune with her dark side, and as we see from the sixth issue of this captivating, future classic, she has no qualms in doling out sinister punishment and evil manipulation… to anyone, it would seem.

While out and about, inspecting the small community of Harrow County, Kammi runs into Jim Webb, who’s out to hurt Emmy after she refused to punish local man, Thad Cribbets for sneaking about, getting a little too close to Webb’s wife, Celia. Jealousy courses through Jim’s entire being and he wants Thad to pay for his intrusiveness. While Emmy refused to get involved in this strange little love triangle, Kammi shows us that she has no problems in making Thad pay a terrible price for his decision to pursue a married woman.

This is a wildly dark spin in the story that’s going to hit home for anyone who’s ever dealt with extreme jealousy, or even worse infidelity. We see the birth of a conflict that will likely have some on the fence. If you’ve been a victim of marital transgressions, it could be quite easy to see Kammi’s work as not only justified but appropriate. Meanwhile those who may not know the grim realities and possibilities of marriage may see Kammi as an outright villain. This is a complex character who is going to ruffle some serious feathers, not just in the world of Harrow County, but in the real world, where we hold this book in our hands and examine a story that’s only gaining steam.

Personally, this is the high point of the series thus far. This is the dramatic directional shift that could set a string of insane events in motion, and I’m salivating at the idea. Where Bunn will take us remains to be seen, but it seems evident that it isn’t going to be pretty.

Once more huge respect goes out to Cullen Bunn and Tyler Crook. Bunn’s writing has been stellar from the jump but he’s really pushing the pedal now. And Crook’s artwork is still as mesmerizing as it’s ever been. The opening pages – which showcase a serious downpour in Harrow County – are eye-popping. The artwork, the ink, the colors – all terrifically haunting stuff. This entire book is a display of perfection. 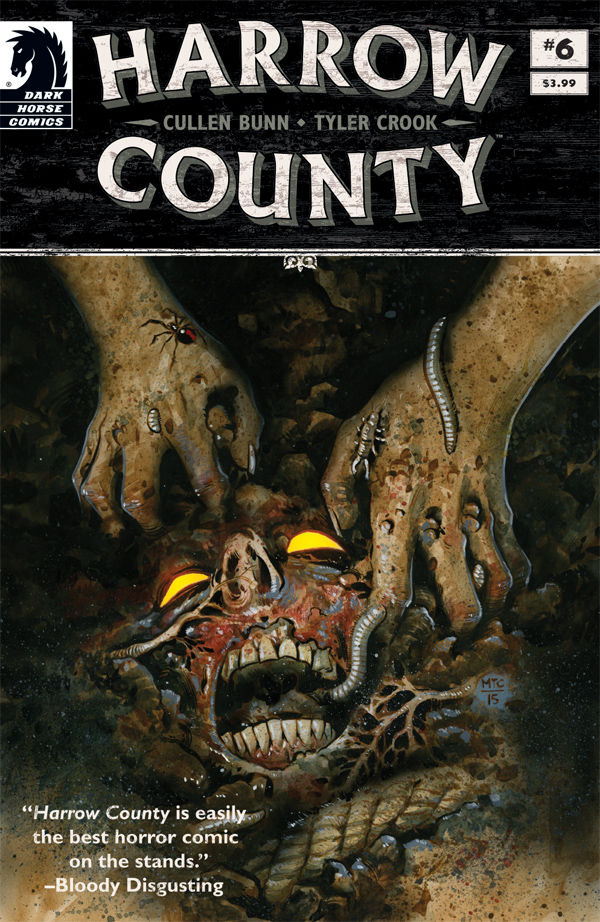