“I was never all that excited about the idea of writing zombie horror,” Chad Lutzke says when asked about The Him Deep Down, a collaborative effort written with author Terry M. West. “But when you have what you feel is a good idea it’s hard to just dispose of it.” West remains consistent with both of their attitude toward the subgenre: “I refuse to write a zombie tale unless I find something fresh to mine.”

The Him Deep Down is exactly that—something fresh.

In a decaying world that’s lost its battle against the undead, a group of desperate survivors search for shelter deep in the Texas woods. What they discover is something far worse than the dead that command the earth.

Authors Chad Lutzke (Night as a Catalyst) and Terry M. West (What Price Gory?) team together to offer a zombie novelette with a different kind of bite. Please enjoy this excerpt from The Him Deep Down. The Him Deep Down is available (for pre-order) as an ebook here for only $0.99.

And the print version is available here. 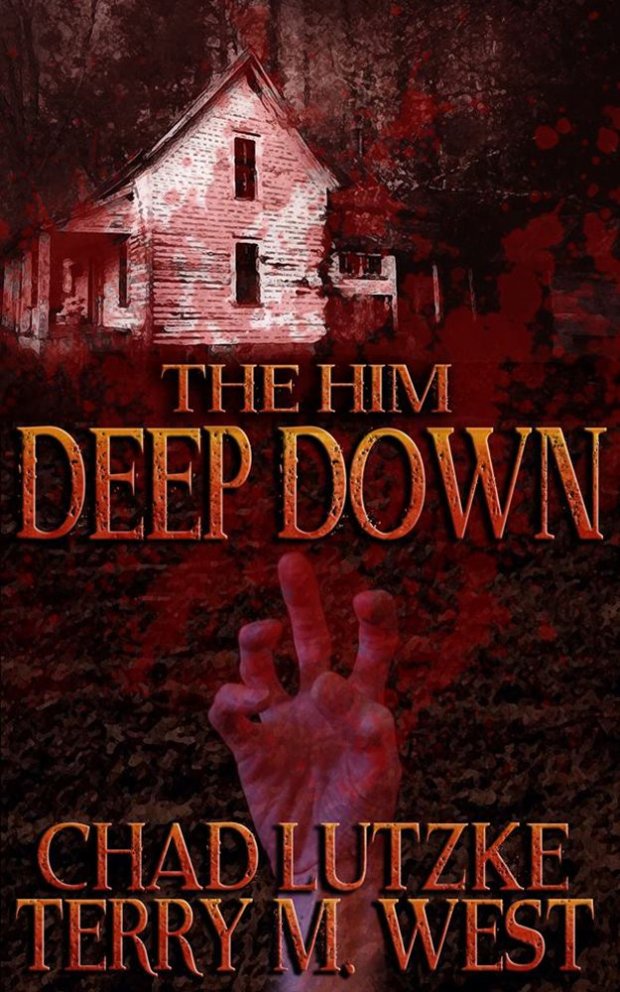 Excerpt from The Him Deep Down

Andy watched the school bus burn. The children inside didn’t scream, even as their flesh was eaten away by the fire. Their small melting hands scraped at the windows. They clawed at the living assembled on the shoulder of the Texas road, oblivious to

their impending demise and hopeful to tear into the group. The dead children within the bus, their blackened bones peeking through taut skin, and dull eyes watching the group of survivors, sank into the fire as it blossomed and painted the small windows of the yellow vehicle.

Andy turned and saw Nikki snuggled up against Tim. Though she was as tough as any of them, she couldn’t look at the bus. She had lost two children and it was too much for her. Nikki had the first kid when she was sixteen and the second only two years later. They died in the plague, before she joined up with the unlikely bunch. Tim, the boy scout that he was, took to Nikki immediately.

Tim was ruggedly handsome, husky and had been a high school quarterback. He still held his varsity jacket, tucked in his backpack like some reminder of the past, though it had been a decade or more since he’d thrown a touchdown pass. Nikki’s long dark hair held a single streak of deep red. It contrasted deeply with her pale skin, which was adorned with both metal and ink—a real modern girl. In a different world, she and Tim may have scorned one another. But not here. Not now. There wasn’t time for that bullshit.

“This is obscene, man,” Tim complained, Nikki still buried in his chest. “Why did we have to do this?”

“Didn’t seem Christian to leave them like that,” Andy said.

“You ain’t a Christian,” Tim replied. “And that psycho brother of yours sure as hell ain’t one either,” Tim continued, motioning toward Steven who stood several yards away.

“If felt like leaving them damned. In hell,” Andy said, stepping a little closer, his eyes glaring back at Tim. “Do you think my brother and I enjoy burning up little kids? Even dead ones?”

“You tell me,” Tim said, looking over Andy’s shoulder.

Andy looked back toward the bus. His brother Steven was waving at the burning kids, mocking them. Andy swallowed hard and turned back, business like, to Tim. “Look, we need better weapons, food, shelter and water. That’s what’s important.”

“He’s right,” Nikki muttered, still clutched against Tim. “And can we please get out of here? I can’t deal with those poor kids anymore. Please!”

“Sure, babe,” Tim said, pulling Nikki even closer in.

Andy turned around and was relieved to see his brother was no longer acting like an ass. Steven now quietly watched the bus burn, a red-stained baseball bat perched over his shoulder. There had always been a distance between Andy and his brother, but Steven’s post-plague behavior widened the chasm all the more.

Something had kept Steven unhappy for years. And it was much more than the heavy acne and braces on his crooked teeth, even more awkward now that Steven was in his twenties. Most of his life he’d been considered a bad seed by just about everyone; his own kin included. Andy had hoped his little brother would change. But now he feared Steven favored this dead and violent world over the one he had grown up in. Every one of them was a murderer and a thief. But Andy could see that Steven seemed to almost enjoy it.

“Come on,” Andy instructed, peeling off his sweaty flannel and tying it off around his waist. “Let’s get in the woods before we get company or that damn bus blows up.”

They walked into the woods, and moved fairly confidently into the brush. They had learned months into the plague that the biggest attribute in detecting the dead was their sense of smell. That was always the first sign—the rot. As long as you had a decent sniffer, you could ferret them out. With the exception of the newly deceased, the dead couldn’t sneak up on anyone with the stench rolling off of them. Especially in the hotter months, and the hottest, August, was on them. It felt like a smothering jacket they couldn’t remove.

The air smelled clean and held no trace of the exceedingly familiar reek of dead flesh, so Andy and his motley group trudged forward with little fear of stumbling across a mass of the undead.

Andy was the only one who noticed Steven intermittently looking back toward the bus, as though getting one last glimpse of a trophy he couldn’t take with him. Despite the blood relation, Andy felt less comfortable around his own brother than those he’d met only weeks ago.

“Forget something back there, Steven?” Andy asked with squinted eyes.

Terry M. West is a well known author, filmmaker, actor and artist. He has written several books in the young adult field (most notably the graphic novel series, Confessions of a Teenage Vampire) and he has also written several horror short stories as well as the horror/thriller novel, Dreg. His work has appeared (or is scheduled to appear) in FrightNet, Scream Factory, Agony In Black, Lacunae, Jackhammer, House of Pain, Dark Muse, Moonletters, Silent Screams, When Red Snow Melts, One Hellacious Halloween, Deathmongers, Vignettes from the End of the World, Halloween Tales, Axes of Evil and Zombified 2. He was a finalist for the 1997 International Horror Guild Award for a short story (The Night Out) and he made the 1999 Bram Stoker Award preliminary ballot for a piece of long fiction (Hair and Blood Machine). He was also mentioned on the 1997 TV Guide Sci-Fi Hot List. West’s books and collections include: A PSYCHO’S MEDLEY, SERVANT OF THE RED QUILL, WHAT PRICE GORY?, DEAD AWARE: A Horror Tale Told in Screenplay, CECIL & BUBBA MEET THE THANG, HEROIN IN THE MAGIC NOW and special collectors editions of CAR NEX, MIDNIGHT SNACK, THE GIVING OF THINGS COLD & CURSED and CECIL & BUBBA MEET A SUCCUBUS. He is also the editor of JOURNALS OF HORROR: FOUND FICTION. His work has received glowing reviews. His filmography includes his debut film, Blood for the Muse (based on his comic book of the same name which was a finalist for the 1998 International Horror Guild Award for a comic) and Flesh for the Beast. He has acted in the films The Blood Shed and Gallery of Fear (both directed by Alan Rowe Kelly) and had a starring role in Joseph M. Monks debut film, The Bunker. Terry currently writes and paints in southern California with his wife, Regina, and their son, Terrence. Terry is an active member of the Horror Writer’s Association. He has a website at www.terrymwest.com. Terry is also the managing editor of the Halloween/Horror website, www.halloweenforevermore.com.

Chad lives in Battle Creek, MI. with his wife and children where he works as a medical language specialist. For over two decades, he has been a contributor to several different outlets in the independent music and film scene including articles, reviews, and artwork, as well as his own—now defunct—publication, Cornflake Overdose. Chad loves music, rain, sarcasm, dry humor, and cheese. He has a strong disdain for dishonesty and hard-boiled eggs. He has written for Famous Monsters of Filmland, Rue Morgue and Scream magazine. He is a regular contributor to Horror Novel Reviews, Halloween Forevermore and Heavy Planet. You can find his fictional work in Shadows & Light #3, #4, #5 A Merry Scary Christmas, Devolution Z Magazine #3, and his Double Feature Collection series, including books I, II, & III: Two Before Dawn, Little Ones of Wood & Hair, and Death Dealers: Aid from the Elderly. Chad’s 18-story horror anthology Night as a Catalyst was released in spring 2015. And late 2015 several more releases will be added to Lutzke’s body of work, including Car Nex: From Hell they Came, and stories in both Straight to Video: The Sequel and Straight to Video: Conquest of the Planet of the Tapes. Chad can be found lurking the internet at the following addresses:

3 Comments on Read an Excerpt from Chad Lutzke and Terry M. West’s ‘The Him Deep Down’ Before You Pre-Order!