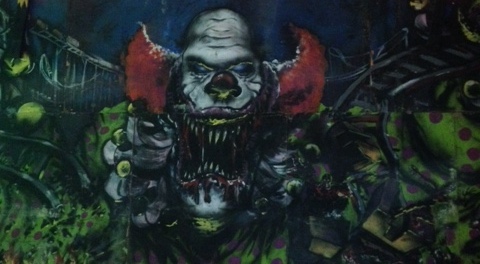 One of San Jose proper’s few haunted attractions, Dead Time Dreams is located on the outskirts of the city, on an eerily long stretch of road that turns nearly pitch black in the night. Thankfully, the moody and carnival-esque lighting of the fairgrounds illuminates up two haunted houses inside—“The Devil’s Sacrifice” and “Backwoods”—both of which are well worth the $20 investment should you be brave enough to enter… 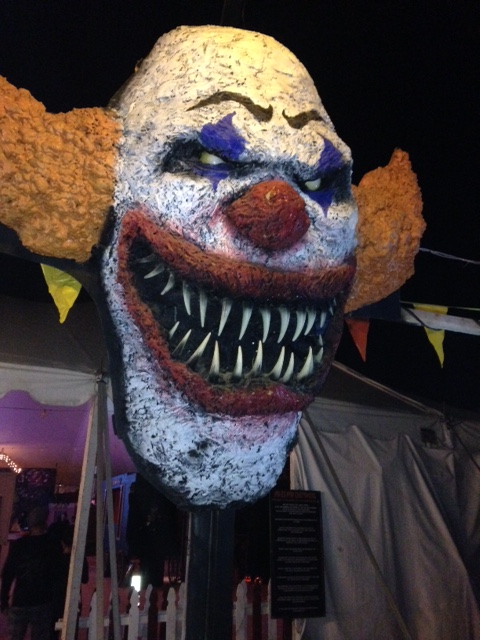 As you approach the creaking door of “The Devil’s Sacrifice,” Rob Zombie’s ultra-sleazy “House of 1000 Corpses” song blares throughout the fairgrounds. Once the song fades, the disturbing sounds of a man describing his desire for murder and cannibalism come crackling through the speakers. The ticket-taker informs us that the voice belongs to Jeffrey Dahmer, otherwise known as the “Milwaukee Cannibal,” the infamous serial killer who dispatched at least fifteen young victims between 1978 and 1991. These aural horrors set the stage for the macabre characters and hellish scenes waiting inside the haunt. As you wander the tomb-like hallways, you are startled by demonic creatures, fiendish vamps, and leather-clad gimps, all battling for a piece of your soul. The climax of the attraction occurs when you meet the satanic “Master” himself, a horned deity who looms high above you in a golden throne, sandwiched between two menacing guards who look ready to pounce. Upon exiting the haunt, many of the spectators commented on the outstanding set-pieces, the creepiness of the actors, and the impressive attention to every gory and blasphemous detail. We then followed the haunting tune of the “dueling banjos,” made famous by John Boorman’s 1972 film Deliverance, to the second attraction of the night…

“Backwoods” was an awesome descent into hillbilly hell. The haunt included such gruesome sights as sacrificed pigs, gutted animals, knife-wielding rednecks, and one lumbering giant of a man who briefly “locked” the women in our group into a separate cell and taunted them with playfully uncouth language and insults. The attraction ended with a spirited emulation of Leatherface from Tobe Hooper’s The Texas Chain Saw Massacre, who chased onlookers out of the haunt with his buzzing saw and blood-stained grin.

Though the carnival-midway elements of Dead Time Dreams leave a lot to be desired (most of the oddities and sights scattered throughout the fairgrounds, including a mini-movie theater showing a vintage horor film, were largely ignored by the attendees), this is one Bay Area haunted attraction that is worth the cost of admission. The crew is dedicated and hardworking, the haunts are expertly crafted and designed, and you’re guaranteed to have a blast with your friends.

Learn more about the haunt here.