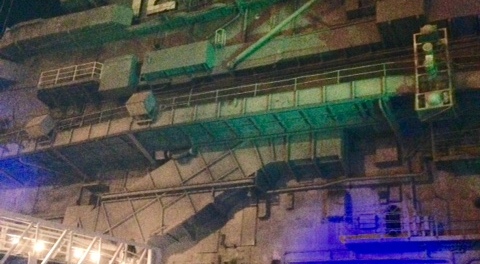 The majority of haunted attractions are held at theme parks, fairgrounds, shopping malls, or private residences. Some of these—including San Leandro’s “Scream Park” and San Jose’s “Rebel Yell Haunted House”—offer truly sinister chills and genuine scares. But if you’re looking for something a little off the beaten path this Halloween season, you should definitely check out “Haunted Hornet,” a fully immersive haunt experience that takes place entirely on one of the most famous naval ships in the world.

The USS Hornet served in both World War II and Vietnam, increasing our country’s military prowess while providing a place of refuge for troops returning to the United States from overseas. Designated as a National Historic Landmark, the massive warship is docked in Alameda, California, and now functions as a museum for locals and tourists alike. Adding to the Hornet’s legendary mystique are the rumors of its various hauntings, including the specters of long-dead Navy officers and ghostly sailors wandering the wind-swept decks late at night.

New for 2015, ScareCo Haunted Attraction and the USS Hornet Museum have joined forces to create an incredible (and delightfully lengthy) haunt that packs in a great number of frightening scenes. As you wander the darkened halls of the ship and descend its narrow staircases, you will stumble across macabre operations and mad doctors in the infirmary; ghosts and lunatics haunt the barracks, lunging for you at every turn; the ship’s kitchen has several gruesome culinary sights to behold, while other rooms feature creepy actors who will interact with you and ask you questions. And just when you think the haunt might be over, it stretches on for another ten minutes or so, providing a stunning and playful finale to the entire journey.

At $40, tickets for “Haunted Hornet” are not cheap, but do keep in mind that a good percentage of the cost goes toward the restoration of this historic landmark. The experience is well-worth every penny; the setting is both spooky and educational, and everyone working the haunt (from the ticket-takers to the actors inside) was incredibly good-natured and knowledgeable. Most importantly, the haunt offers a very theatrical experience, an exciting trend that has caught on in Southern California but has yet to ignite a spark in our parts. Here’s hoping that “Haunted Hornet” will change that! Highly recommended for all.

Learn more about the haunt here