Alex Hunter pops up in the Kremlin. Literally. He’s just cut his way through two feet of reinforced concrete and steel in the Kremlin basement to either rescue or terminate a captured American army captain.

To catch you up, Alex Hunter is a super soldier. He was so damaged during a previous mission that he was given an experimental treatment to save his life. The treatment worked almost too well. Alex now has increased strength and speed, but at a high cost. The treatment has made him subject to fits of rage. He also has his soft side which shows in his love for his child and the child’s mother, as well as for his team.

In the prologue, we find that an American sub was caught and dragged down by something huge and powerful in 2008.

Today, at the English research station in Antarctica, they hear a beacon which was picked up by their probe. A huge eye peers at the researchers, just before the probe gets crushed in a lake under the ice. They discount the beacon as random noise, but the signal is monitored by the Americans.

At the Chinese Antarctic station, their diggers break through a hole in the granite under the ice and they too hear a signal from behind the rock wall. This means that the sub is miles away from where it disappeared and two miles under the ice and rock, as well. Then the Chinese diggers and engineers start disappearing. First at night, then during the day, until only one person is left alive and he is babbling about an evil spirit that has taken everyone.

The Chinese and the Americans are now in a race to get to the sub. A lot of saber rattling could lead to a very dangerous situation.

Like every good monster story, we are led piecemeal to what is under the ice. There is the smell of ammonia which the Chinese team encounters. Gouge marks in the tunnels. A warm breeze well below ground where there should be no air movement. And, of course, the eye that the British probe saw.

Once again Mr Beck introduces us to the most incredible technology. Talk about a flight suit, Alex wears one made of polymer and ceramic as he parachutes from a plane flying just under Mach 1 and at several thousand feet.  There are explosives that are so hot they can melt steel cannons, incredibly flexible body armor that can deflect bullets, probes that can quickly drill through miles of ice and rock. And that’s just a few of the things we are introduced to. Techies, be prepared to get your socks knocked off.

Mr Beck is a master at building up suspense. Just when I think that nothing else can be thrown at the protagonists, the author ratchets up the suspense some more. This is absolutely a page turner. He is quickly converting me to be a lover of action books. You’ll be tempted to read this all in one go, but at over 500 pages, you probably won’t be able to, so you’ll just have to anticipate your next reading session. It’s a big book, but would I cut it anyplace? No! It’s just too good. If I could give it more than 5 stars, I would.

Kraken Rising is another in the continuing series of Alex Hunter books. There are references to other stories, but this book easily stands alone. 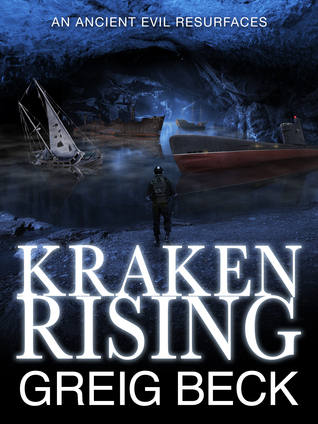