IDW kicks things off with a showdown in the old west between Venkman and a gang of undead bastards who love to torment and terminate the lives of those residing in the small town of Red River. Why is Peter in the old west? Because Koza’Rai, father to Gozer has banished the Ghostbusters to the four corners of time. It seems he wasn’t too pleased with the damage the group dished out to his little one. But that banishment isn’t going to hold up, as a new face – that of Rachel Unglighter – surfaces in the nick of time. Rachel’s an aspiring Ghostbuster who broke into their old headquarters in order to boost their gear so that she could travel back in time and save each of the four original heroes.

And just like that, the first segment of the story teaches us that Displaced Aggression is a tale that centers on time travel, banishment and radical personality shifts for the Ghostbusters. Rachel saves Venkman and it’s off to gather the remaining Ghostbusters one by one, battling all sorts of different beasties (my favorite would have to be the sperm-esque exploding demonic manifestations featured in the third chapter of the series) along the way to a final showdown with the powerful, evil and menacing Koza’Rai

This is just a great story. The concept itself is outlandish but perfectly relevant for a Ghostbusters tale; nothing is ever “normal” in the world of these four men. And the inclusion of a new Ghostbuster works to add more depth to the tale. It’s awesome seeing nods to classics like The Wizard of Oz, and some of Lovecraft’s work, but the unique spins are just as rewarding. Scott Lobdell crafts an excellent story and remains faithful to the personalities of our focal protagonists while Ilias Kyriazis offers some superb artwork and color.

Yet again, IDW offers us a scintillating genre piece. One of today’s greatest publishers of comics and graphic novels, they’ve got yet another hit on their hands with Displaced Aggression. Check it out, the first chance you get! 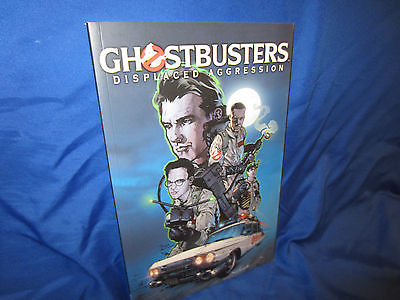