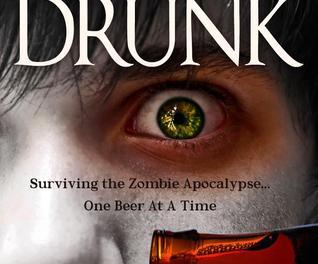 Whereas the characters in The Walking Dead get all sullen and existential when they run low on food, the degenerates in Richard Johnson’s novel say fuck it, let’s pound beers and eat cat food.

Sadly, for me and my friends, this is a very real possibility with or without the apocalypse.

Charlie is their de facto leader. He’s substitute teacher who sets the tone at the beginning of the novel when, like the petty drunk he is, he purposely fails a first grader for pissing him off while sipping on a rum and coke.

My kind of guy.

The rest of the cast consists of a racist cop, a pervert, a foreigner, everybody’s hated white trash conservative uncle, a closeted gay guy who endures homophobic slurs from his buddies (until they find out he really is gay and accept him without hesitation), a survivalist hippie and many more.

They shouldn’t be surviving the zombie apocalypse, yet they endure. They’re mostly content with doing shots, smoking dope and swimming in a kiddy pool, all while talking shit to each other within the confines of the survivalist hippie’s fortified apartment.

The shit talking between zombie attacks is the best part. I found myself more interested in their juvenile insults than I did their battles with the undead, although the action is funny as well because these guys suck at it.

The cop is a bad shot. The former MMA fighter has a beer gut and almost gets eaten alive while passed out in the back yard after dropping a deuce. And, oh yeah, he wakes up with a boner, because of course he does.

These fellas are not heroes. When they encounter a pair of starving females, their first thought isn’t to save them, but whether or not the girls will trade sex for cat food.

When they see a child stuck in a tree, besieged by the undead, it takes them three days to save him, and even then just barely. They’re unapologetic when they do the things we hope we wouldn’t during the apocalypse.

There’s the obligatory band of criminal marauders (who are, naturally, out looking for medicine for the boss’s girlfriend’s puppy), but I won’t spoil their appearance, I’ll just say it’s fitting. By the time the Chinese military shows up, everything has been going bonkers for so long that you’ll just nod and say, “Yup, now the communists are here for some reason,” without skipping a beat.

Some readers will be offended by the banter and some uncomfortable racial stereotypes. Yes, an angry black man named Tyrone threatens to call Jesse Jackson and a Chinese soldier actually says “Of course I love egg roll!” At first I was put off, then I realized this book is full of stereotypes, including the racist white cop and conservative uncle.

Don’t let it bother you. This book doesn’t have time for nuance. It’s too busy having fun.

Have fun with the end of the world for once and get a copy here.