I can’t say when the reader got there. But I knew I was glad when he did. Daniel was rubbing me the wrong way: like a blind-date with a leaking whitehead; and the oozing thing sat on her nose, following my eyes wherever I turned. It made me think of Jack Nicholson. So I named it Johnny.

Then I got up.

“You’re late reader, we’ve been waiting.  I couldn’t start the interview without you. Well, I’m lying. I did. You didn’t miss anything, though. I just been busting my chaps here with Daniel. He’s been trying to convince me of this Rhine Maiden bullshit since he got here. Have you taken your meds today, Daniel?”

“Anyway, lessee – oh, Reader, this is Daniel – Daniel, reader. He’s the anti-hero, here to give us the lowdown on his uneventful existence. You care for coffee, reader? Make haste then so we can get on with it! We were just getting to the good part. Daniel, tell him what you told me this morning, about the photo guy at the drugstore, yeah, him.”

I whispered to the reader, “It’s a two out of five. Just letting you know now and before you get comfortable. It’s much more fun to torture the willing, yes?”

And I’d been giddy to stop talking. Talking to Daniel was like talking to a salad; He just says shit. Half of it makes little sense or reason. And it’s not charming or funny. But goddamn he tries so hard. I didn’t want to hear his story again. But the sadist in me smiled. It was the reader’s turn:

You could tell this by his odor, which smelled like cottage ass and an overripe Vlassic pickle dipped in limburger cheese dip, topped with Aqua Velva, which he totally did for the girl’s benefit.

Excerpt from Do You Believe in the Rhine Maiden? By Craig Caudill.

And he described it the same way as last time: with the Vlassic pickle and everything; and what the hell is cottage ass, anyway?

I grimaced somewhere inside, somewhere close to my bowels, I’m sure. “Oh yes, Daniel, that’s charming. Go on, now. Tell him about that woman – that whale you saw on TV.

On season two she lived on a tropical island where hot men solved puzzles, answered trivia, performed feats of strength, freestyle dancing, reading comprehension, proof of G.E.D. and other displays of mad skills such as lip-synching darts, cornholing and finally lawn darts.

Excerpt from Do You Believe in the Rhine Maiden? By Craig Caudill.

Proof of G.E.D? I thought. The reader looked at me and shrugged. His smile faded like dye on cheap fabric. I was losing him. Maybe it was worse than I originally thought. I knew Daniel prepared for this interview, him and his partner, Craig Caudill, his story’s writer.

But when he describes things — Christ, this was awkward.

“Okay,” I sighed. “Time for our main course, yes?” I chuckled. It was as dry and awkward as this interview. “We’re here for your story, about the Rhine Maiden. So let’s go.”

He nodded and droned on: told us about his boring office job, his mad skills, his dreams of flying and pecking fish, of drowning and a woman singing. I found it ironic really, when he talked about how boring his colleagues were, like what he had to say was any more fascinating or captivating.  Napoleon Dynamite had mad skills – not this fellow.

“Then I fell in the river…”

I wiped the dribble from my mouth and sprung up. “River! You fell in the river!”

Daniel went on. “Because it was all so beautiful.”

Then a pang of guilt. There were tears in Daniels eyes. I wondered if I was being insensitive. Nope.

“Daniel, I’m sorry. This talk about a maiden that draws people to death: those people leaping from buildings, those drowned and torn apart. It’s all fascinating stuff, Daniel…”

But your flow of ideas is so awkward to listen to.

At least I was mostly honest.

I endured that interview for another hour. The reader stayed with me afterwards and we begrudgingly combed over the full transcription of Daniels story. We had to assign it a rating after-all – typical protocol around here, you know? Unfortunately, when I get tired, my mind springs leaks. This means what I’m thinking is harder to hold in.

“What was wrong with this story, reader?”

He must have sprung a leak, too. And I felt much better about my behavior. He was relentless.

“Well, where do I begin…

“Obviously he wasn’t prepared. It shows in his writing, here, see. Look at all these misspellings, and this awkward flow and sentence structure. It takes away from the experience. And on paper it should be exciting, but it’s dry as hell to read as he writes it, just like at the interview. He seems to lack a unique and compelling voice.

“Also,” he went on. “Not even the other characters are interesting: These paranormal investigators, the Rhine Maiden herself, even. And it doesn’t try to make sense, this whole, she draws people in with singing bullshit; this isn’t Greece”

The reader glared at me. “Not you too?”

He sipped his cider and added. “At least the concept is intriguing – I’ll admit that.”

And both of us laughed in the end. Daniel did say some funny things from time to time: few and far between as they were. I frowned as I put the report away: as I saw that bluish woman on the cover, again – experiencing her as if for the first time: an alluring thing, a solemn and silent beauty. I have to say it felled my spirits. I turned off the light in my little studio, half expecting Daniel to call out.

“Such a missed opportunity with this one, Daniel…” 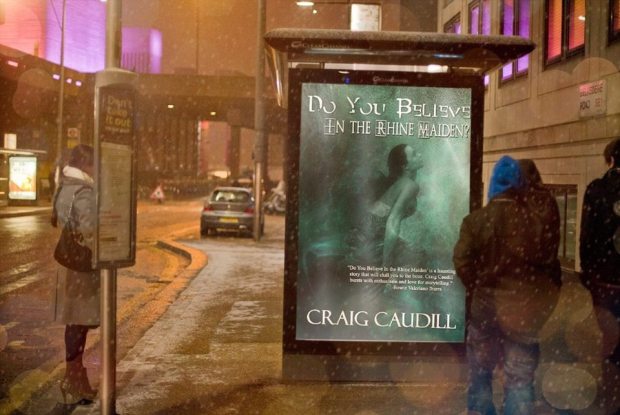