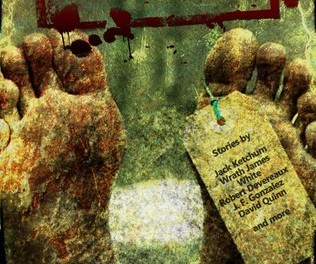 “The Devouring” by Kristopher Triana

“If Memory Serves” by Jack Ketchum

“Scream and I’ll Come to You” by Raymond Little

“One Flesh: A Cautionary Tale” by Robert Devereaux

“Under the Pretext of Propensity” by Anton Cancre

“Every Drop of Blood has a Soul” by David Quinn

“Dr. Scabs and the Hags of El Cajon” by Robert Essig

“The Proud Mother” by Ken MacGregor

“Slice of Life” by Thomas Pluck

“Give me Something Good to Eat” by Shane McKenzie

“Linger” by Daniel I. Russell

So, is the collection better or worse than its predecessor? The answer is a definitive yes and no. The highs are higher and the lows are lower. Most collections are a mixed bag. However, the quality of stories in D.O.A. II is more variable than most collections. Some of the weaker stories are by subgenre mainstays, while relative unknowns write to impress.

The anthology begins with a bang. Kristopher Triana’s “The Devouring” is a love story like no other. Alex and Violet are sadomasochists with a fondness for movies. After watching a snuff film, they decide to one-up the filmmakers. They will show the world their true devotion to one another in the most disturbing way imaginable.

“Bordertown,” by Laura J. Campbell is another standout. Dr. Anna Zidek is fresh out of medical school. Heeding a call for doctors, she moves out to the town of Dew to begin her career. Dew has a very healthy population. Diseases, like cancer, are unheard of. On the surface, the community appears to be a modern-day Eden. Yet, this prosperity comes with a cost. Will Anna pay what is due?

Several authors, including Calie Voorhis and Shane McKenzie, return from the original anthology. Voorhis produces the Carrie-influenced piece, known as “Threads,” while McKenzie puts a unique spin on Halloween with “Give Me Something Good to Eat.” Both remind readers of the writing which made the first volume in the series such a success.

In many ways, the D.O.A. series has quickly become the Splatterpunks volumes for a new generation. Hayes and Burton fill the role of Paul Sammon admirably. They are collecting some of the most extreme and disturbing stories on the market today. Does that mean the next John Skipp or Joe Lansdale lies undiscovered within the pages of D.O.A. II? Pick it up and discover for yourself.