“It’s a simple truth but most people never learn it. Evil rarely starts out as a big, horrible, obvious thing that ever simply shrinks smaller over time.”

Twisto’s Town: Chronicles of the Undead is just that, twisted!  This is the story of George Burns a young convict who was locked up in the Bayonne Prison down in Louisiana. He’s a bit dim-witted but has a good heart.  With the undead gaining populace the prison had been all but abandoned by the guards and prisoners were left on their own.  You can read more about the back story (The Fall of Bayonne) here for free. Although this is a second book in the Chronicles of the Dead I feel it can be read as a stand alone as you can garner enough details within the story so as to not feel lost.

George is on a mission to make amends for all the wrongs in his life. As he makes his way to Charenton he is accompanied by his old pal Vito who just so happens to be dead but lives on in George’s mind, always ready to give advice when George is in trouble. Along the way he runs into “Cato” Mr. Jacobie a former acquaintance from Bayonne.  With Cato in tow the trio (?) arrive in Charenton with a bang, literally.

No safe haven here, the town belongs to the twisted and the dead. Here they find clown faced zombies with their mouths sewn shut, these are the town’s friendship ambassadors, just a part of the welcoming committee.  Oh and do make sure you have a smile on your face, lest the Happiness Deputies see you frowning. Twisto the Clown is running this town and any hope of salvation should be checked at the gate.

This is non stop action. Never a dull moment here; between George and other various living beings not in the grips of Twisto, there is something constantly going on. I promise you won’t be bored.  In a roundabout way this is a story of right and wrong, redemption and retribution, it’s a damn good story. If I were you I would buy it now, buy it here!! 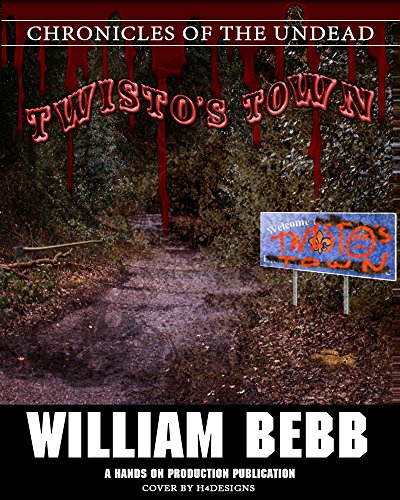