Coming of age tales are fairly common in horror literature. These include several masterpieces, such as Stephen King’s It and Brian Keene’s Ghoul. The transition from child into adulthood can be a scary time. When done well, coming of age tales remind us of this turbulent stage in our lives and the struggles everyone must go through as they strive to figure out who they are and who they will become.

Boot Boys of the Wolf Reich, by David Agranoff, is a coming of age tale done well. The story follows two young skinheads in Chicago during the late 1980s. One, by the name of Paul, has just moved from the suburbs. Of mixed race, he is looking to the join the local SHARP (skinheads against racial prejudice) crew. The other, Sonny, is just out high school and signing up with the local neo-Nazi group.

The two boys find themselves in conflict with one another almost immediately. The conflict is centered not only on the fact that they are in rival gangs, but because they love the same woman, a skinhead by the name of Tracey. As the SHARPs win several decisive battles against the Nazis, a new presence appears. Klaus Schroeder, an SS soldier on the run from Mossad, has come to America. He has brought with him a gift that could sway the balance of power and begin the foundations of a new Reich. Now the SHARPs are not just dealing with neo-Nazis, but neo-Nazi werewolves!

The group dynamics of children are always fascinating. In this case, the dynamic is further complicated by the nature of skinhead gangs. Both the SHARPs and Neo-Nazi crews are portrayed in a realistic and life-like way that envelops the reader. It is a testament to Agranoff’s writing style and his own personal experiences in the subculture.

Skinhead references abound with each chapter starting with the lyrics of a hardcore or punk band. This is both a blessing and a curse. For those familiar with punk, the book is instantly accessible while it may turn off those unacquainted or who disapprove of the lifestyle. Many of the terms used throughout the book remain unexplained or only passively described. This can lead to some confusion among the uninitiated.

Do you listen to Agnostic Front, The Business, or Sick of it All? If so, Boot Boys of the Wolf Reich was written for you. It is your life in a nut shell, only with werewolves. If not, you may still enjoy it, but it may take some getting used to it. 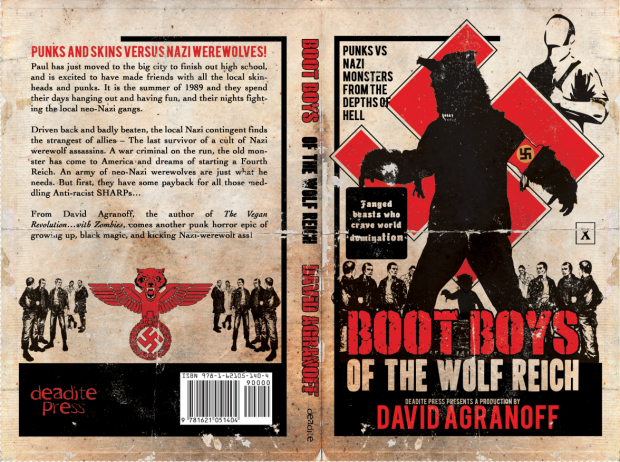