I recognized this book straight away as the basis for the movie of the same name – and when I checked, yes, Scott Smith also wrote the screenplay. I enjoyed the movie, but I loved the book.

First of all, Smith’s writing is superb. He keeps a firm grip on his story the whole way through, never one for moment stumbling. It’s not often I’ve found a book written in third person omniscient that works so very well, giving the story a unique and fascinating tone. It almost puts the story one step removed; the narration is never coloured by the intense emotions the characters are going through, it reports everything with the same, almost detached, interest. For a writer, reading this book was a fascinating experience of the craft and art; as a reader, I was hooked on a storyline that made me want to look away but kept me there, unable to desert the characters as they dealt with a situation that became increasingly desperate.

Like a lot of horror stories, looked at dispassionately, the events of the book are outrageously unlikely. It is a credit to the writer, that while I was reading it, I believed every word. It didn’t seem impossible at all – it felt frighteningly real, and I spent the pages asking myself what I would do in that situation, deciding that if I ever was, I would do this or that, but probably, in all reality, exactly what the characters in the book did.  It’s a rare story that can make us put away the real world so completely.

The prose, so dispassionate, was hypnotising. The setting – the hill, the burning sun, the noxious vine – all so finely portrayed that I could have been there. With a story that depended on the setting for the story’s action, Scott Smith did a terrific job of making it real, believable, and so utterly horrifying.

It’s not a new storyline, of course, in its broadest strokes – what story is, these days? A group of young people, isolated, battling the dangers of their environment, struggling to hold themselves together and survive as individuals, and a group – no, it’s not strictly original, although the details are, and anyway, it just doesn’t matter, because it’s done so well. It seems strange to say that a book with such fantastical features is also incredibly realistic, but this one is. The characterizations are spot on. The characters react in ways that are shocking while we read, but in reflection are completely in tune with human nature. They fall apart, just like we would in that situation.

That’s part of where the real horror in The Ruins lies. Read it, and see if you agree. You can order it right here. 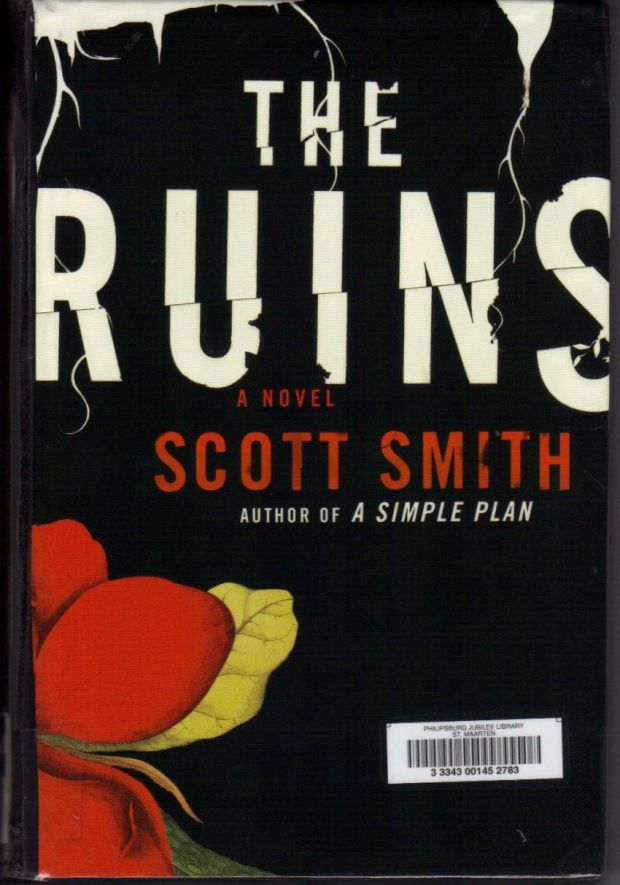