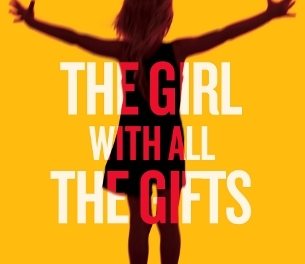 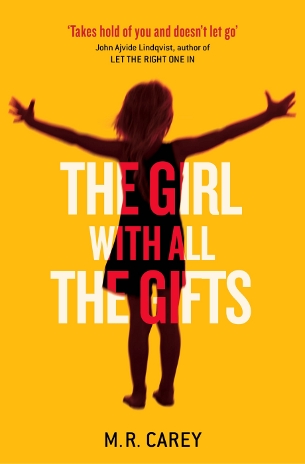 The Girl With All the Gifts by M.R. Carey is quite the story.  Just when I thought I had read it all when it comes to zombies, this comes along and blows me away.  A brilliant story, told so very well.  M.R. Carey is the pen name of a well known British author, who has penned both fiction and comic books.  His books have appeared on the New York Times graphic fiction bestseller list regularly.  He has also written for DC and Marvel and even has a Hollywood screenplay under his belt!

From the first page I was caught up in the story of Melanie, a precocious ten year old.  Melanie lives on a protected base called Hotel Echo outside of London. All the children there live in cells and are only taken out for school classes. The children are special and while under the “care” of Dr. Caldwell they are being examined to see what it is that makes them so special.   One of the teachers, Miss Justineau has formed a strong bond with little Melanie and it is this bond that will eventually save them both.

It’s been 20 years since the hungries first appeared.  When the government realized they could no longer control the spread of the hungries, they began rounding up the normal people to live on protected bases.  Some people refused to go and have tried fending for themselves, these folks are the junkers. Over time the junkers have become little more than savages, fending only for themselves.

One day when some soldiers go out on patrol they run into a few junkers and the encounter ends badly with a couple of junkers dead.  The junkers are angry and out for revenge, so they herd the hungries and launch an attack on the base.  Barely escaping with their lives are Melanie, Miss Justineau, Dr Caldwell and two soldiers, Sergeant Parks and Private Gallagher.

As they try to make their way to another base some 40 miles away, we are taken through the wastelands on an incredible journey.  It’s a journey of self discovery and startling revelations, both terrifying and beautiful.  Yes, there may be zombies in the story but it’s not the zombies that are the story.  Don’t miss this one!

3 Comments on M.R. Carey ‘The Girl with All the Gifts’ Review