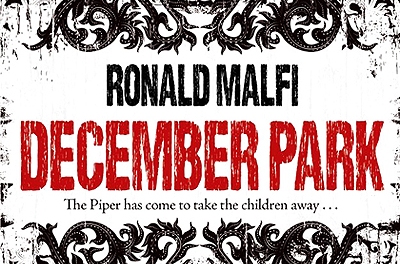 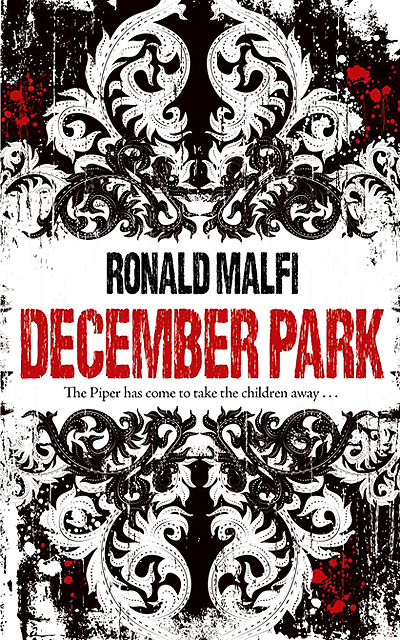 “You think a person could actually die from fear?”- Ronald Malfi. ‘December Park.’

In ‘December Park’ the “sleepy bayside hamlet”of Harting Farms, Maryland in 1993 is visited by ‘The Piper”, a predator whose victims are nascent adults and whose sinister activities effectively  manage  to cripple the heretofore relatively carefree everyday lives of its populace. Before long the streets and alleys of the town are transmogrified, their mundane appearance melted down by an unpredictable and malignant threat. Following a spate of disappearances an evening curfew is set in place while authorities scramble to seek out the perpetrator. Tensions in the town are ratcheted up and an almost palpable sense of dread descends whenever the sun begins to set with parents anxiously fretting over their offspring’s whereabouts.

Malfi’s premise is certainly not an original one to anyone who has steeped themselves in horror and crime fiction, but it’s the restrained manner in which the author relates his tale that proves to be the novel’s real ‘hook’. In another writer’s less capable hands this tale of  a group of five mid-teenage boys and the various adventures they embark upon might well have resulted in a sickeningly mawkish  fictional concoction, but this grim scenario proves to be yet another scintillating example of a writer whose interests are patently not those of someone interested in uncluttered disposable diversion, rather that of a gifted author whose clear intention lies in making a long lasting, profoundly resonant impression on the reader.

Angelo Mazzone is fifteen years old, and it’s through his perspective that we’re offered up a vision of teenage life in a town suddenly infected by suspicion, apprehension and insidious paranoia. Malfi’s protagonist is a charmingly depicted stripling – a veritable ‘everyteen‘- one gifted not only with having a close-knit group of friends and peers, but beset by the concerns that that age is typically obsessed by. His peers are suitably anachronistic and memorably drawn, all with their own unique attributes and flaws. One of Mazzone’s acquaintances “did not own a single article of clothing that hadn’t been fashionable at least a decade earlier” while another – a painfully awkward introvert- Angelo describes thusly: “the kid stood out like a turd in a punch bowl”. Music of the time suffuses and underlines the  milieu of the novels setting- Nirvana, Alice In Chains, and (God help us) Jesus Jones.  There are numerous other pop culture references too- with one particularly grim cultural milestone alluded to in this story that affords Malfi’s narrative a layer of poignant nostalgic texture. Malfi’s ‘Angelo’ is an adolescent wholly saturated in the cultural zeitgeist but he is also an individual with an unusual purview of the terrible events occurring in this Chesapeake-based urban sprawl; his father happens to be a policeman, and, of course is heavily involved in investigating the disappearances of the local children.

‘December Park’ the novel, much like Malfi’s fictional park itself, has a multitude of secrets, many of which are disseminated in great depth in this book, but the real terror lying at the heart of this beautifully written tome is not the perhaps more obvious one. This admirably bridled narrative has an altogether different intent; this is a bittersweet love letter to youth, family and friendship and the joy that can discovered in recognizing and battling human frailty. Loneliness and the injurious nature of fear are amongst other themes running throughout this delicately layered novel, but at its heart it’s ultimately a terrifying study of a group of friends gathered together and put through an extraordinary sequence of increasingly sinister events that even the most seasoned of genre purveyors should find genuinely unsettling.

Though the book’s pace is measured – often almost languid in places- it speaks of a writer confident in his abilities to develop his characters so that when Malfi introduces his unnerving set-pieces they come as a genuine surprise. Arguably there’s some salting of characters that are deliberately set up to give the reader pause, but on the whole, this never approximates clunky plot manipulation, and the denouement- when it arrives – is delivered in a fine and unaffected fashion.

In the notes written by the author prefacing this novel, Malfi asserts the following, “Any writer worth their salt has inside them at least one good book about their childhood.” This is a frightening, thoroughly engaging read with a deeply moving series of narrative motifs running throughout, ones that needle the mind and tug at the heart in the best way and this reviewers only real complaint is that it had to end at all. A triumph of suspense, an affectionate ode to adolescence and by far Ronald Malfi’s strongest effort to date.