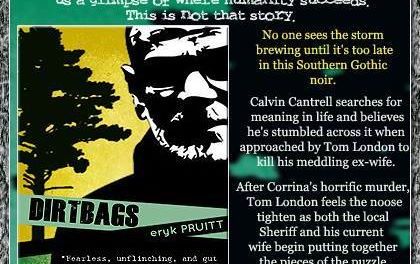 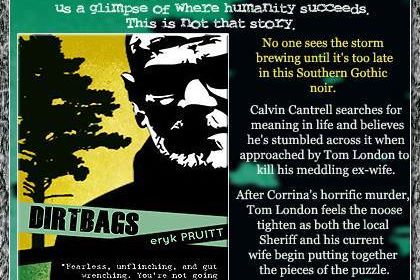 “We are all infected and impure with sin,” he said.  “When we display our righteous deeds, they are nothing but filthy rags.  Like autumn leaves, we wither and fall, and our sins sweep us away like the wind.”

Whoa, talk about fear factor, this is one creepy read!  Eryk Pruitt brings to life Calvin Cantrell, an insignificant nobody with aspirations to become the best serial killer ever.  Dirtbags reads like an episode of an Investigation Discovery show, a blunt, in your face telling of insanity in the making.

Calvin can’t hold a job, he’s married to a stripper and he’s always dreaming up the next get rich scheme.  His latest plan is to get his wife Rhonda working at a restaurant in order to seduce the owner and blackmail him.  However the restaurant owner, Mr. London has his own agenda, he wants to hire Calvin to kill his ex-wife. All it takes is this one request to awaken Calvin’s true calling.

Calvin enlists the aid of an old high school acquaintance to accompany him on his first kill but when things begin to go south, Calvin rises to the occasion and makes his first kill alone.  From there on in, it’s no holds bar, Calvin’s a man on a mission and he’s going to make sure everyone knows, he’s numbering the kills and the numbers are climbing.

Rhonda who has been helping Calvin stage his deeds is beginning to see the cracks in the veneer.  She reaches out to her old boss Bubba Green at the strip club for help, but when he rebukes her she decides it’s all or nothing with Calvin and gives him her all. The cops are closing in and the pace is getting frantic, there’s only one way this can end or is there?

What a great debut novel, I’m so looking forward to more by Eryk Pruitt.  He gave real depth to his characters and even made me feel a little sad for Rhonda. Be careful next time someone knocks at your door!