The number of films adapted from a work by Stephen King are too numerous to list here; but, the number of excellent movies based on a story by the horror maestro is a lot shorter–The Green Mile, The Shawshank Redemption, Stand By Me, Misery, The Dead Zone, Hearts of Atlantis, Delores Clairborn, The Mist, Cujo, Christine, and 1408.  This movie, starring John Cusack, was one of the best films I saw the year it came out, and the Director’s Cut with an alternate ending on the special two-disc DVD collection is just as good, if not better in my opinion.

For those of you not familiar with either the story or film, John Cusack plays Mike Enslin, a man who travels around the country and debunks the myth of haunted houses and rooms, publishing the results in his “occult travel guides.”  He simply doesn’t believe in the afterlife or the supernatural, or anything for that matter, especially since the death of his young daughter from a long illness.  Everything changes, however, when he visits the Dolphin Hotel in New York City and stays in the infamous Room 1408.

Though the manager of the hotel (played wonderfully by Samuel L. Jackson) warns him about the dangers of the room and the large number of people who have died there, Cusack’s character thinks it’s all a bunch of hot air, designed to attract people to the hotel and increase the yearly revenue.  Once Cusack gets settled into the room, however, things start happening to slowly change his mind and by the last quarter of the film, he’s struggling just to stay alive.  That’s when he decides to fight back and to figure out a way to destroy the room and its evil residue. 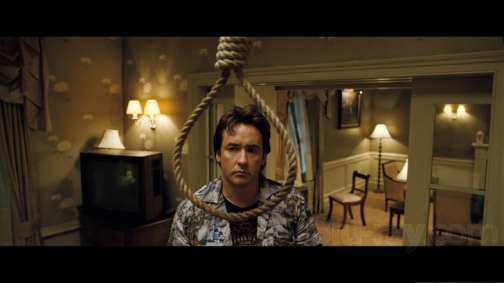 For me, this was one of John Cusack’s better roles.  He carried ninety percent of the film on his shoulders and did so brilliantly.  I believed in him and his character, and I desperately wanted Mike Enslin to make it out of the room alive.  Samuel L. Jackson also did a great job as the smooth talking manager who knows the truth about Room 1408 and decides to let John Cusack do what he has to do.

The special effects of the film are utterly believable and extremely intense and will have you sitting on the edge of your seat, spilling the popcorn on the floor.  I also have to say that though I really enjoyed the theatrical version of the movie, I think the Director’s Cut on the two-disc set was even better.  It was longer with an additional seventeen minutes added to the last third of the film, and the alternate ending was more realistic.  If you’re a fan of Stephen King’s writing, or an avid viewer of horror flicks, I would highly recommend this movie.