I’ve now seen Kimberly Pierce’s Carrie reboot twice. The first time I nearly overdosed on repulsion. But being the horror freak that I am, I had to give it one more chance. Well, it just hit discs, so it just earned a second chance. Sadly, my opinion hasn’t wavered much.

This is an embarrassment of a remake. Carrie White is no longer a believable loser. She’s now an incredibly cute young lady who – not in a million years – would be plagued by bullies of any sort at high school. I was out of high school in 1999. I still remember those days, albeit faintly. Had a girl who looked like Chloe Grace Moretz attended my high school, I’d have been doing everything in my power to court the young lady myself. Furthermore, the first asshole to pick on a doll like that would have devoured a knuckle sandwich for lunch, and probably on more than one occasion.

But we’re supposed to see Moretz as we saw Sissy Spacek (who, for the record, was perfectly cast), ugly and alone, not a kid in the entire school willing to entertain any form of friendship with her. Pardon my French, but that’s the biggest load of bullshit Hollywood has attempted to feed us since… well, since the last shitty teenie bopper remake (IE Prom Night, The Fog, April Fool’s Day and all the other horribly uninspired attempts to draw immature 15-year olds to theaters) to hit the market. It’s never for one moment believable. 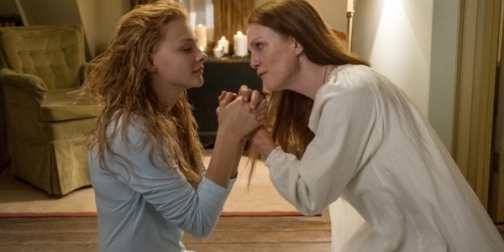 But the problems with this flick stretch so far beyond Moretz’s casting it isn’t funny. I don’t mean to sound misogynistic, but this flick was so obviously made by a female, with the intent to appeal primarily to females that it’s baffling. There is zero bid to charm the male consumer… for some reason. This is like Mean Girls, gone violent for 15 minutes. The high school focus is all feminine dramatics, again, with no care whatsoever to even attempt to relate to a younger male viewer. And not a moment of it is realistic. This is a co-ed school, after all. Apparently Kimberly forgot that.

Had the young ladies of Marysville High School circa 1995-1999 behaved as these despicable, shallow devils do, I probably wouldn’t be a father today. I probably would have opted to pursue the male gender, because girls like this are repulsive enough to actually make a man loathe female presence… to an unfathomable degree.

The dialogue is obnoxious, most of the supporting performances are miserable and, as amazing as it is, Chloe Grace Moretz – who is a damn fine performer – even sputters. It seems even Chloe herself knew she’d been miscast.

When you watch Brian De Palma’s original rendition of King’s tale, you know immediately that the film is supremely intense. The opening shower scene is completely staggering and unbelievably impacting, and that intensity never subsides. Furthermore, there are at least a half dozen characters that we as viewers are fully invested in. Whether antagonist or protagonist, there are personalities that gain our attention and hold it in an unwavering grasp. There isn’t one single character in Pierce’s film that we care about. Not one.

Now, having trashed this movie tremendously – because it does genuinely deserve it (I don’t want to hear a damn peep of that oh, major effort was made to put this flick together, so the makers automatically deserve credit crap; a terrible film doesn’t warrant praise, doesn’t get a pass because work was invested, no matter how challenging it was to bring it all together, especially a pic that completely defecates on the source material and initial cinematic transfer), I’ve got to say there are about 12 enjoyable minutes in the film. Amazingly, those fleeting moments come at the prom itself. I’d feared Pierce would botch this sequence terribly, but it’s the one point in the movie that proves enjoyable. Especially the moment in which that wretched human being Chris gets her face smashed straight through a windshield.

So, ladies and gents, that sums up the Carrie remake. It’s a terrible, terrible, terrible, terrible remake (rivalled only by the aforementioned films in this review), sans a dozen brief minutes. However, if you don’t care about any single technical aspect of a film, and if you happen to be an extremely immature, abnormally shallow individual, or you simply don’t know shit about horror movies… maybe you’ll like it. If that’s the case… well… I’ll just pull the plug before I get as offensive as this abomination of a film was.