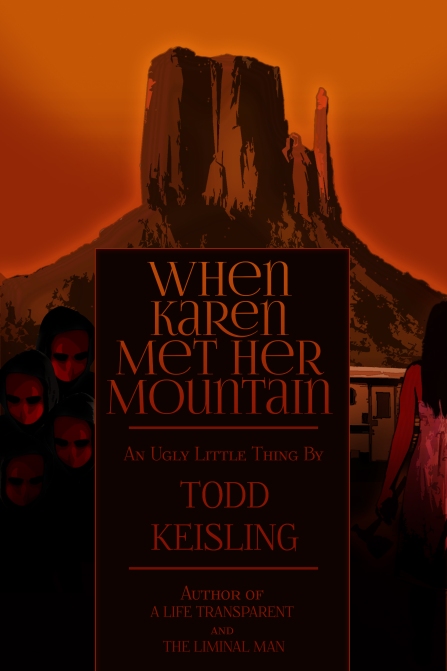 Women are interesting characters. They can be overly sensitive, remarkably perceptive, passionate, spiteful, and of course – murderous. And Karen, the titular character in Todd Keisling’s second Ugly Little Things installment, When Karen Met Her Mountain, embodies all of those emotions, to an extreme extent. But, Karen’s got a pretty damn good reason to be tangling with that plethora of sentiments. This woman has endured absolute Hell. And while she may initially appear to be the looney of the tale, a wicked twist proves that maybe, just maybe she’s the one who actually sees the world for what it is.

This isn’t a particularly lengthy tale, but Todd paints a very intricate portrait that offers a multitude of layers and an uncanny measure of depth. When Karen Met Her Mountain is fleshed out to the fullest, and that makes for a rewarding read. Even if it is overwhelmingly depressing. And, believe me, this isn’t an uplifting piece, it’s loaded with dark personal matters, and if you’ve ever experienced a close death, extreme depression or a bout with infidelities, it’s going to toy with your emotions like few tales manage.

The character development, though truncated due to story length, is amazing. As readers we know that Karen is essentially living in an alternate universe, where the stars have aligned and conspired to break her will. We also know exactly what kind of man her husband, Martin is… but I’ll steer clear of those details, as Martin’s actions and subsequent fate make for the tale’s true power punch.

Again, Todd Keisling proves that he’s a unique talent, dedicated to crafting mesmerizing stories. This particular story is harrowing, truly frightening and utterly heartbreaking. Todd’s Ugly Little Things series continues to improve, but it may be quite the task to surpass the quality of this treasure. When Karen Met Her Mountain is a masterful tale.