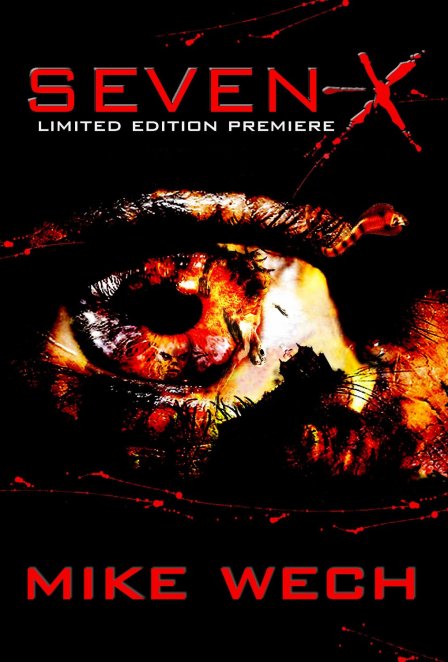 Mike Wech got the idea for Seven-Xwhile reading the Bible.  This is his debut book and the first in a planned series of both books and movies.  Mike started out his career path as an actor, from there he moved behind the camera.  His first feature was “The Moment After 2: The Awakening”; followed by “South Dakota” and “The Exodus of Charlie Wright.”  So I think we will be in good hands when it comes to any book to movie deals.

Eddie Hansen is a bit of a loser. He’s a reporter looking for that one big story that will make his career.  Along the way in search of the “big one” his wife has divorced him and cut off his ties to his daughter.  Now with the help of his girlfriend Melanie he thinks he’s finally onto something.

Rumor has it that there is a behavioral health center in Uphir, Texas that is housing supposedly executed convicts, where they are conducting illegal experiments on them.  Eddie is especially interested in finding Annette Dobson a mother that has murdered all of her children one by one each time claiming SIDS.  Annette was pregnant yet again when the death sentence was handed down.  Eddie just knows if he can track down Annette his career will be made.

Eddie’s big break comes when he secures permission from the Doctor in charge of the facility to come in and conduct interviews, with the stipulation that he voluntarily signs himself in as a patient. It’s while Eddie is housed at the center that the story unfolds.  Through journal entries, video tapes and recordings all being sent to Melanie we begin to find out what’s going on.  As Melanie begins piecing everything together an unearthly presence makes itself known.

This is a story of good vs. evil.  Possession and redemption.  Demons’ fighting to gain entrance to one’s very soul.  The Bible states when one demon is exorcised he will bring back 7 more to try again (Matthew 12: 43-45) hence the title.

Ironically, before starting this book a friend had posted the question, what are some of your favorite lesser known found footage movies?  That is exactly how this book reads!  You can visualize what’s happening as you go along journal entry by journal entry.  I can’t wait to see this on the big screen.