The mini-series, Bag of Bones, is based on the Stephen King novel of the same name.  Surprisingly, it took the director, Mick Garris, five long years to get the financial backing needed to make this adaptation.  The project first started out with the intent of being a feature film, and then over time, the script was rewritten for the small screen.  Thank goodness A&E was willing to fund this project, or it wouldn’t have happened.

Now, I’ve been a big fan of Pierce Brosnan since his Remington Steele days on television.  There’s no doubt in my mind he was the perfect choice for the role of Mike Noonan in Bag of Bones.  I’ve seen the strong, dramatic acting that this man is capable of doing in other films and knew he could handle the performance without any question.  The fact is Mr. Brosnan has simply gotten better with age.

Was Mick Garris able to pull off the adaptation from novel to television? 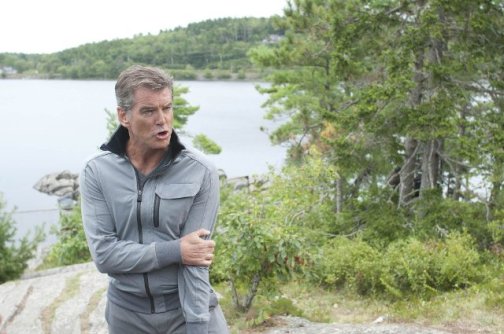 Unlike the previous television networks, A&E gave the director pretty much all the freedom he needed to make this mini-series a success.  True he had a small budget and a tight shooting schedule, but he got the absolute most out of every dollar spent and each day on the set.  The quality of the cinematography and production design is certainly much better than in Desperation.  There’s also a touch of class with this production that clearly shines through.  Like Pierce with acting, Mr. Garris is simply getting better as a director with age.

Now, what viewers need to understand is that Bag of Bones is not a horror novel, though there are elements of the supernatural in the story.  Stephen King wanted to write one great book before he turned fifty and Bag of Bones was what he created.  It’s the same with the television movie.  Though there are strong elements of the supernatural in the mini-series, it’s not really a horror movie.

The TV movie centers around successful Maine author, Mike Noonan (played by Pierce Brosnan), who experiences a mind-numbing tragedy when his wife, Jo, is unexpectedly struck by a bus while he’s autographing novels across the street in a bookstore.  Annabeth Gish (I remember her in the television series, Flash Forward) plays his lovely wife.  The movie has to establish rather quickly just how much the two of them are in love with each other, and I think it succeeds.  You could see these two people together, enjoying their lives with each other.  That makes the death of Jo more shocking and disturbing for those who haven’t read the novel.

Pierce Brosnan performed a magnificent scene when he found his wife lying in the street dead.  Anyone who has ever lost a loved one will see the grief etched on his face as clearly as day.  I don’t think he was acting here, but rather displaying the actual grief he’d felt when losing his first wife to cancer.  I mean the scene made me cry.  I knew what he was going through, and I believe that’s when I truly bonded with the character.

The plot point that propels the story forward, however, is when Mike Noonan discovers his dead wife was pregnant.  Since Mike couldn’t have children because of a low sperm count, he begins to suspect Jo of having had an affair with someone.  Jo had also been spending a lot of time at their summer house on Dark Score Lake.  Over a period of time, Mike begins to wonder if that’s where her lover lives and decides to visit the place for an extended period.  The time frame was much longer in the novel.  I think it was a couple of years.  It’s also important to note that since Mike was a fast writer, he had several novels stashed away in a safety deposit box in the novel version of the story.  In the movie, however, he only had one old trunk novel that he gives to his agent and publisher to keep them happy while he’s unable to write.

Once Mike arrives at his house on a lake, he soon finds himself involved with a young lady and her daughter (Mattie & Kyra Devore played respectively by Melissa George of 30 Days of Night fame and Caitlin Carmichael).  Mike manages to save Kyra’s life by pulling her out of the highway before she can be hit by a car.  After he does this, he quickly finds out that Kyra’s grandfather is Max Devore, the most powerful man in the region.  Max is attempting to get custody of Kyra by claiming Mattie is an unfit mother.

Since Mike Noonan has problems of his own to deal with, he really doesn’t want to get involved in Mattie’s situation.  Things, unfortunately, don’t work out as he desires.  When old-man, Max Devore (played by William Schallert) pressures him to testify in front of a paid-off court official about the traffic incident, Mike takes Mattie’s side to piss the man off.  Of course that makes an enemy of Mr. Devore and his female assistant, Rogette Whitmore (played by Deborah Grover).  The assistant seems to be even more evil than the old man.

While all of this outside stuff is going on, Mike is experiencing supernatural events at his house on the lake.  He knows his wife is there with him, but there’s also another spirit, Sarah Tidwell, who wants him to seek revenge for her death.

In time, Mike discovers that Tidwell (played by the lovely and talented Anika Noni Rose) was murdered in 1939.  That’s when all hell begins to break loose and Noonan finds out things about his own family’s past and how it ties into the singer’s death and Max Devore’s unusual family tree.

As I said earlier, Bag of Bones isn’t a scary novel and neither is the movie.  Director Mick Garris throws in some supernatural aspects regarding Mike Noonan’s dreams about his wife and Sarah Tidwell, the spirits in his summer house and how they often communicate with him by ringing a bell that’s hanging from a moose’s head over the fireplace.  There’s also a very strange looking tree near the lake that’s shaped like a woman’s body and offers a jolt or two in the show.  In many ways, the novel and mini-series are actually about Mike Noonan coming to grips with his own grief over the death of his wife, the past that catches up to him by the end of the movie, and how his family inadvertently brought on some of the tragedy he experiences.  In the book, he falls in love with Mattie Devore, but not so in the movie.  She’s simply a piece of the bizarre puzzle that deals with Sarah Tidwell.

I feel that Mick Garris did a fantastic job of condensing a long novel into a two part mini-series, not to mention the great cinematography and set decoration in Nova Scotia that makes it look like Maine.  I thought most of acting was top notch, especially with regards to Pierce Brosnan, who had to carry most of the film on his shoulders.  I have to admit that Deborah Grover as Rogette Whitman gets the trophy for the creepiest performance.  Whenever she was in a scene, she pretty much stole it from the rest of the actors with her strangeness.  She needs to play in more horror movies.

One last thing I enjoyed was Matt Frewer performing as Mike Noonan’s brother.  I kept thinking I knew Matt from somewhere.  It turns out he played the Trashcan Man in The Stand mini-series.  During that particular series, he shot a scene in the old Stardust Hotel in Las Vegas, where I was working at the time.  This is a very talented actor who needs more roles offered to him.

There isn’t much in the way of extras, other than some deleted scenes.  Still, the DVD is perfect for the Stephen King collector who wants to have all of the author’s movies on disc.