“How about a little something to lower your spirits?” – Lambert.

“Ten Little Indians” is how director Ridley Scott described the plot of ‘Alien’ to actor Harry Dean Stanton (Brett) before he agreed to take on his role in this late seventies science-fiction/horror movie. Stanton expressed his disdain for celluloid ‘monster’–centric narratives, evidently concerned that the ‘man in a rubber suit’ running around killing characters off plot would be something he’d rather not have on his career resumé. Scott’s allusion to the thriller dynamics of Agatha Christie’s novel apparently allayed Stanton’s concerns enough for him to sign on. 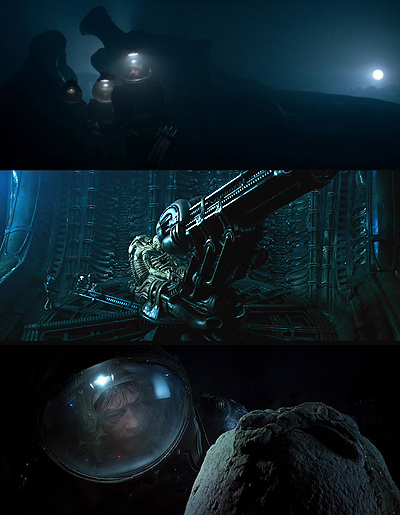 There’s no doubt that the scenario of ‘Starbeast’ – as it was originally titled before producers Walter Hill and David Giler re-configured Dan O’bannon’s original screenplay – is an extremely thin and simplistic one, obviously thematically indebted to the monster on the loose B-movies of the fifties and sixties such as ‘It! The Terror From Beyond Space’ and Mario Bava’s ‘Planet of the Vampires‘ in particular. In much the same way Scott did with Stanton, the director manages to convince the audience to do the same thing; take a chance on a movie that, on the surface, painfully appears to contain the celluloid DNA of those films and present it in such a way to the audience that they’re distracted from the admittedly more ‘pulp’-like aspects of the narrative and taken on a profoundly disturbing, atmospheric journey into the heart of the disconcertingly absurd.

In the novelization of ‘Alien’ by Alan Dean Foster, the book opens with the line, “Seven dreamers”, referring of course to the principals about to awaken from ‘hyper-sleep’; it’s a line that fits in with the tone of the fim; this is ostensibly a strange dream captured for the screen, filled with Bosch-like nightmarish imagery, Francis Bacon-inspired explosive violence and where the fragile logic of cognizance is sabotaged by events that belong more readily in the world of somnolence. Seven dreamers engaged in bringing back to Earth mineral oil mined from planets so far into deep space that it requires the staff to be placed in a state of suspended animation during cargo transmission for years at a time. Their space-bound vessel, the ‘Nostromo’ is itself  a battered-looking affair, it’s exterior a hulk of gargantuan proportions complete with spires above its mineral oil storage tanks that hint at a Gothic-inspired construction sensibility. Within, the decks are crammed with  claustrophobic hallways fitfully seething with steam, worm-like pipes hugging the walls, submerged in febrile shadows. The interiors nicely match the appearance and spiritually depleted demeanour of the crew, save perhaps for one, the starch-mannered Science Officer, ‘Ash’, whose emergence from cryogenic suspension is notably bereft of self-pity or apparent discomfort. With the ‘truckers-in-space‘ crew awake, and the grimy, dismal, factory-like nature of the ship that they are travelling aboard established, O’Bannon’s skeletal conceit surfaces; the crew have been awakened to attend to a distress call received by the ship’s near-sentient computer- an oddly matriarchal construct named ‘Mother’. Since the crew’s salaries are all forfeited if they refuse to answer such a call, they’re begrudgingly committed to investigating the source.

Often accused of being a helmer whose work is more ‘style-than-substance’, whose primary concern is the images he frames, it’s something of moot point when talking about an artistic medium that is primarily a visual one. There’s a solid argument to be made in favour of Scott’s auteur approach, given his background and his artistic proclivities – Scott recently commented in an interview that he enjoys spending his spare time painting – particularly if the results are as spectacular as this movie and his follow-up effort, ‘Blade Runner’ proved to be. The artistic veneer he applies to this genre movie elevates the source material, allows the audience to be distracted by the carefully delineated textures and lighting schemes that dazzle and confound, subsequently forgetting the paucity of character development while the scripts horrific events blossom before our eyes.

If there’s a unifying tone throughout the film it’s one of furtive darkness, of things half-hidden, obscured. From the point when the crew awaken in their comparatively bright sleeping chambers, onto the canteen, proceedings get progressively gloomier until the movie finally unfurls its nasty and sanguinary mid-point surprise.

The casting of this film has much in common with the impressively unconventional nature of the realization of the movie as a whole; none of the principals were particularly well-known-and certainly not what would now be considered marquee material. And, there are no instances of grand-standing in the movie- where an actor deems it fit to exhibit their own ‘quirky’ motifs performance-wise at the expense of character immersion and audience-engagement. This is a solid cast of character actors who, along with the production design and direction, again raise the stakes and encourage the audience to empathise with the characters increasingly awful dilemma, in the process forgetting the reed-thin structure of the story.

Oscar winning composer, the late Jerry Goldsmith admitted to being terrified after seeing a rough cut for the movie before he set about scoring it – citing one specific sequence, Brett’s demise as an example, pointing out how slow and deliberate the pace of the overall film was, and how that added to the overall impact, an aspect the editor, Terry Rawlings, explained was essential to heightening the suspense quotient. The editor argued that after slowly ratcheting up the tension in the first and second act, it was then more agreeable for the pace in the third act to go hell-for-leather, allowing the audience little respite. However, using the score Goldsmith composed for the film proved to be problematic, with the result that many of the temp-score cues Rawlings initially inserted  into the rough assembly cut were retained for the film’s finished version. Strangely, many of the music cues used in ‘Alien’ were taken from a movie Goldsmith had scored in the Sixties entitled ‘Freud’. Anyone who’s seen Alien, with its dream-like imagery and psycho-sexual subtext might pause to consider and ruminate on Rawlings’ motivation regarding the use of music cues culled from a film based on the father of psycho-analysis and his famous observations on the nature of dreams.

Which brings us neatly to Swiss artist H.R Giger’s contribution to the project. The inclusion of this artist’s work to this film cannot be overstated. Giger’s body of work, even to this day, incorporates many of the basic tenets expressed in the work of celebrated surrealist painters like Salvador Dali (with whom Giger was a good friend). While Art Director Roger Christian was busy giving life to Ron Cobb’s meticulous function-obsessed production designs and Ridley Scott’s Jean Giraud Mobius -inspired storyboards for the ‘Nostromo’ and ‘Narcissus’ interiors, and Michael Seymour was charged with dressing the sound-stage at Shepperton Studios with sand  rocks and detritus, Giger was busy crafting unwieldy fleshy eggs, bone-walled chambers, vulva-shaped entrance-ways to a derelict spacecraft and a creature with a phallus-shaped head and enough teeth to perturb a responsible orthodontist. Though Freud would’ve had a field day with the sub-text of the imagery, Giger was allowed to creatively give ‘birth’ – much like the character Kane physically does in the movie – to a monster that audiences had certainly never seen depicted on screen before. Giger’s unnervingly realized ‘alien’ is a sleek, bio-mechanical, glycerine-coated killing machine complete with an extra set of KY-jelly coated propulsive secondary mandibles, genetically programmed with a morbidly lethal mantra used in some promotional material for the movie at the time of its premiere, ‘It Kills to Live- and Lives To Kill’. There’s a dark, disturbing beauty to Giger’s work – repulsive, yet elegant, a design that unquestionably lends to the picture a dreadful, unforgettable resonance.

Such an impressive confluence of creative minds ultimately distilled and filtered through a director with a fiendishly detailed painterly vision results in a searing, original cinematic result, utilising a miniscule budget – eleven million dollars and change- that is just not seen very much these days. The production values are gorgeous, sumptuous and rich detail. The impact of this movie, on pop culture has been a profound and lasting affair and stands to this day as a testament to the ingenuity of all the creative minds involved. ‘Alien’s ideas and themes have since been imitated ad nauseum, but have markedly lacked the artistic skill and ingenuity to truly replicate the wonder and terror still to be found in this brilliantly rendered nightmarish fictional concoction. The Hollywood bean-counters of today with their vapid, soulless appreciation of singularly financial concerns seem still to not comprehend the reasons why a movie of this caliber succeeded; this is art and necessary commerce -always an uneasy marriage- allowed to ferment and deliver a ‘product’ that satisfies both parties, producing not only an end-result that was wildly successful but one that purveyors of the horror/science-fiction genre still savour to this day.

Alien is an example of what Tinsel-town execs and film historians like to refer to as an example of ‘lightning in a bottle’, but in this case it’s perhaps it’s more fittingly described as being akin to ‘a nightmare in an egg.’