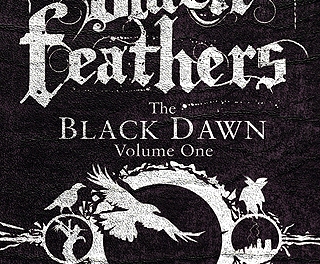 There’s a continuing fascination with themes that are suggested by fiction that are centered around  the idea of an apocalypse. Whether the ‘end times’ are precipitated by famine, disease, war or other  annihilating ‘agents’, the outline makes for a potentially diverting  narrative as the concept offers up the eternally enticing idea of literally ‘wiping the slate clean’, an intriguing tabula rasa,; what might happen if we were to be afforded an opportunity to revise our society, perhaps modify our civilisation for the better. Novels such as Russell Hoban’s ‘Riddley Walker’, Stephen King’s ‘The Stand’ and other similar fiction endeavors offer up absorbing visions of how we might reconstruct ourselves were such an awful  event ever to occur. Joseph D’Lacey’s ‘Black Feathers’ – while it does repeat the familiar thematic concerns that are prevalent in many stories rooted in the notion of armageddon, it’s an agreeable revelation that he does so in a such a grimly riveting fashion here. Arguably the shortcomings of his narrative intent has little in common with embracing the standard tenets of ‘end of the world’ scenarios, and more to do with the more mechanical aspects inherent in dividing his dark treatise into two volumes, of which this is the first of his ‘Black Dawn’ duology’.

D’Lacey’s first tome has twin narrative threads, a kind of before and after literary methodology, where the writer allows himself the prospect of investigating dual perspectives. On the one hand we have the present-day tale of young Gordon, the youngest child in the Black family in England, who may or may not hold the key to the future of the world, whose spiritually apathetic country has been gripped by the rise of a vile and brutal demagogy in the form of the corporate army known as ‘The Ward’. As a counterpoint – D’Lacey flitting to an unspecified date in the future – we have the story of young Megan Maurice, a young girl ‘selected’ by an agrarian-based civilisation to uncover and disseminate the legend of a fearful entity known as ‘The Crowman’ or ‘Black Jack’. Darting between both narratives D’Lacey constructs a harrowing and thought-provoking conceit highlighting the disease-like nature of greed, self-absorption and underscoring the injurious consequences of acting in a self-serving manner as individuals and as a collective society.

As D’Lacey further unfurls his unsettling scenario, it’s to his credit as a captivating storyteller that his own  barely contained seething rage with the way we as people generally behave en-masse is never allowed to mire his text. It’s there, though barely sublimated and it bleeds from the pages as his plot – initially a slow-burning affair, gathers speed. The author, to a large extent, eschews the standard penchant for gore and spectacle, electing instead for a relatively bridled tone. That said, there are flashes of sanguinary violence and when they occur they are profoundly resonant. The journeys of both primary characters are, chiefly, satisfyingly unpredictable, as both nascent protagonists encounter and grapple with their respective challenges, and the manner in which D’Lacey weaves their tales together rarely feels manipulative or plainly ‘juggled’ in terms of literary construction.

The language is considered and vivid, with prose that is often lyrical and endearingly lacking in convolution. It’s debatable that this is the work of author whose world-view is curiously optimistic, despite the events and the appallingly vapid cultural mindset he depicts here. D’Lacey posits a mythos that while it incorporates strands of familiar pre and post apocalyptic speculative fiction, he convincingly synthesizes those hoary old concepts and offers up his own stimulating approach to the genre. And as the novel careers to a vigorously paced and rousing denouement, the overriding sentiment one is left with upon finishing is that the next volume of the ‘Black Dawn’ can’t arrive soon enough.