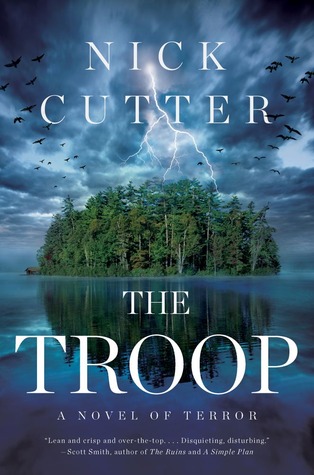 “It is a fact that cannot be denied: the wickedness of others becomes our own wickedness because it kindles something evil in our own hearts.”

The Troop by Nick Cutter is such a horrific tale of epic proportions that it was hard to put down.  It’s one of those stories that could really happen, or maybe it already has!  The story is told through narrative, interviews and news clipping which works well with the telling.

Dr. Tim Riggs a scoutmaster from Prince Edward Island has taken his troop of five young teens to Falstaff Island for a weekend wilderness campout.  The island is an uninhabited nature preserve and has a lone cabin for hosting small groups. Little did they know they were about to learn survival skills in the most brutal manner.

An emaciated man shows up on the island the first night out.  Looking near death, Tim a doctor foremost allows the man to enter the cabin. Unknowingly he has just allowed an escaped test subject access to unleash a horror that has never been seen before!

It starts with a hunger, a gnawing hunger that can’t be satisfied.   Scoutmaster Tim realizing something is wrong tries to protect the boys from any harm as he begins to deteriorate.  The boys find themselves having to make some hard choices to survive and not all of them will.

I won a copy of this book from a Goodreads giveaway.  The book is to be released February 2014 and I highly recommend it.  The storyline was a nice change of pace, fresh and original.  Nick Cutter hails from Toronto, Canada and is a pseudonym for an acclaimed author of both novels and short stories.  I’m dying to know who it is!  Any guesses?