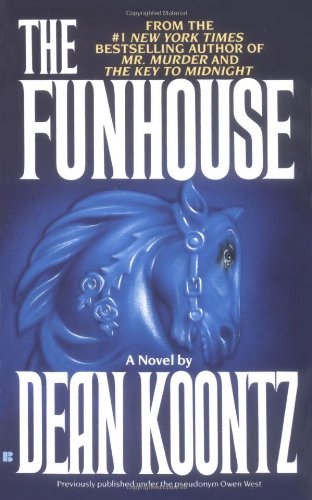 “The Funhouse, I think, is better than that. It’s fun. It has something to say. The background is authentic.And not least of all, it’s pretty damn scary, even if I say so myself. I hope you enjoyed it.

And a moment of silence , please, for the late Mr. West, whose remains continue to disintegrate, in that field in Burma, where the herd of oxen– and the movie version of The Funhouse–drove his too mortal flesh deep into the oily, black mud. the end.” – From the Afterword, by Dean Koontz

There are a number of people who over the years have dismissed this piece of fiction and horror as too simple of a read, and also those who have been unforgiving due to the release of the movie. This is unfortunate because it is a fun and scary story as Mr. Koontz himself has pointed out in the quote I’ve opted to use as the introduction of this review. This was released in 1980, which is when I initially read it. When I reread it again I still found it to be just what I remembered it to be. Yes, he was a young author (that has since developed into quite an excellent writer), but I refuse to allow that to diminish this one in anyway. So let’s take a look at this tale of horror, revenge, monsters, and redemption.

This story takes a trip through time. Starting with a young run-away named Ellen that marries a cruel carny man named Conrad. While their marriage is a disaster from the start, we find the couple become parents of an evil monster baby that Ellen recognizes cannot be allowed to stay alive and so takes his life. These characters – to an extent – function in the background here, but ultimately prove essential to this narrative. After the death of the child Conrad literally ejects Ellen from his life but not without first cursing her future children. Now fast-forward 27 years and meet our focal characters.

Ellen’s children Amy and Joey are just two young people trying to figure their own way through life. They have both grown up with a guilt ridden mother. Amy has reached a rebellious age while Joey has survived, still able to maintain a gentle soul. Though Joey realizes his life is at risk from the very source of his existence: his own mother. As such he has decided he needs to get away from her while he still can. Our two characters here have begun to make plans of their own and set things in motion but there’s just one glitch that arises here for both of them: the Carnival has come to town. And it is drawing them in.

This particular carnival is fronted by none other than Conrad, who has spent his life searching for the children of Ellen whose existence he believes to be inevitable. He is our main antagonist here. Hatred and revenge have motivated him throughout all these years, so deep and malevolent that it has been his very reason for existence. He arrives in town sensing that he has finally reached his destination.

What happens next is not anything I am going into detail about. The details shall be left for you to uncover. What I’ll say is this: the pending events are quite frightful and bring this story to a satisfying conclusion. Will you like the ending? That’s always a question mark when reading any story. This one has had quite some discussion about it. I personally liked it and found the finale to be rather gratifying. Would I recommend this? Most certainly… after all, I chose this novel to review.