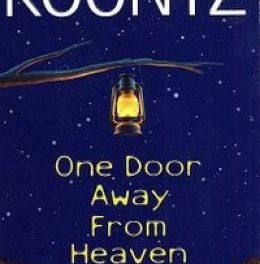 I’ve been an avid fan of Dear R. Koontz for over three decades, and I can honestly say that his novel, One Door Away From Heaven, is without a doubt one of his best pieces of fiction.  This book literally took my breath away and left me with a profound sense of optimism concerning the future of mankind and our planet, as well as a strong urge to go out and acquire a dog as a fellow companion.

The novel begins in southern California when Micky Bellsong, a young woman who’s trying to get her life back together after having just got out of jail, meets her new next-door neighbor, nine-year-old Leilani Klonk, in the trailer park where she and her Aunt Geneva live.  Micky is lying in her aunt’s backyard one afternoon, working on a suntan, when Leilani walks over and introduces herself.

Leilani, though beautiful in face and spirit, not to mention having a near-genius intellect, is also crippled in her left leg and has a deformed left hand.  After some chitchatting, the two females find themselves quickly bonding.  When Leilani is invited over to have dinner that night with Micky and Geneva, the little girl tells them about her life and the death of her brother.

It seems that Leilani’s stepfather, Preston Maddoc (a handsome ex-university professor and investigator of UFO phenomena) murdered the boy because of the child’s deformity, not to mention a large number of other people.  Leilani therefore believes that she’s next on Maddoc’s hit list and that her death is going to occur on or before her tenth birthday.  What Leilani tells Micky and Geneva sounds so preposterous that they don’t know whether to accept it as fact or fantasy.

Before they can learn more, however, Leilani and her family disappear into the night, and Micky now has to decide whether to follow after them in the hope of saving her young friend.  At the same time this is happening, a motherless boy, who calls himself Curtis Hammond, and his dog, Old Yeller, are being chased across the state of Colorado by the U.S. government and also by something far worse and more frightening…something that will destroy anyone that gets in its way.

Unknown to both of the children, they are on a collision with each other and with death.  Only one person might be able to save them.  His name is Noah Farrel–a tough ex-cop who’s now a private investigator and has a thing for rescuing abused children.  As good as Farrel is (even with the help of Micky Bellsong), he may have just met his match with Leilani’s evil stepfather and the ruthless, unforgiving force that is after Curtis.

One Door Away From Heaven is a taut thriller that’s utterly suspenseful with in-your-face excitement that keeps you turning page after page as if you’re obsessed with the book.  It has some of the most vividly drawn characters that Dean Koontz has ever written, both good and evil.  And if that wasn’t enough, One Door Away From Heaven is also a spiritual treatise that will have you looking at the stars in a new and more profound way, wondering if the author has the inside scoop on what’s out there and on the Presence that created us and the universe.

At the beginning of the novel, Aunt Geneva tells Micky that “Sometimes–not often, but once in a great while–your life can change for the better in one moment of grace, almost as a sort of miracle.  Something so powerful can happen, someone so special come along, some precious understanding descends on you so unexpectedly that it just pivots you in a new direction, changes you forever.”

This book is one of those unexpected miracles that can change you, if you’re open and ready.  Buy it, read it, then tell your friends about it.  One Door Away From Heaven is a book so special that you’ll definitely want to share it with those closest to you, especially your canine friends.

1 Comment on Dean Koontz ‘One Door Away From Heaven’ Review