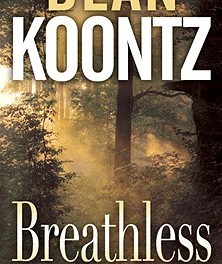 There are going to be a few spoilers in this review, so don’t read it if you don’t want to know.  I have to mention certain things in order to discuss the reasons why I loved this novel; yet, certain parts of it really didn’t make sense to me.  (I’ve finished the review and the spoilers were kept down to a bare minimum, if any at all).

First of all, I first ordered the hardcover of Breathless back during the middle of October of 2009.  A week later I was in the hospital, fighting for my life due to blood infection resulting from the tremendous swelling of my legs and poor circulation.  When I finally got out of the hospital and returned home the day before Thanksgiving, the book was waiting in a box for me.  I opened the box and glanced through the novel, thinking I’d read it in the next week or two, but that didn’t happen.  I stuck the novel on my bookshelf and there it stayed for the following year-and-a-half, hidden by other books I later purchased and stacked up sideways on the shelves in front of others.

When I moved to a new apartment at the beginning of 2010, I saw the copy of Breathless as I was packing up my books.  I also saw about a hundred other novels I’d bought, but hadn’t read.  Once I was in my new apartment, I stacked the fifteen big boxes of books up against the living room wall (I have a very small apartment and the bedroom closet was already full) with the intention of eventually buying a nice, giant-size bookcase to hold the majority of them, which I finally did several months ago.  Occasionally, I’d go through the stop section of boxes to look for something to read.  I never saw Breathless in any of those boxes.

Last year, I finally forced myself to look for my thesaurus, which I desperately needed for writing.  That meant having to go through the bottom section of boxes, and I dreaded the thought of doing that.  Well, I found both my thesaurus and Breathless in the very last box and pulled them out.  It was one of those “A hah” moments.

I needed something else to read, but I wanted it to offer the possibility of a grand mystery that was inter-mixed with the unknown and the amazing.  Quite often, Dean Koontz’ books do that for me.  They take me places other books don’t and make me laugh out laugh in pure happiness and with a sweet joy at being alive.

“What?” you’re saying.  “A Dean Koontz novel makes you laugh and feel happy?”

For the past thirteen years his novels have done that to me, and it all started with From the Far Corner of His Eye.  Fans of Dean Koontz know exactly what I’m talking about because no matter how dark his books may be at the beginning, they tend to offer a ray of bright sunshine at the end that gives the reader hope for the future.

Breathless did that for me.

The story begins when Grady Adams takes his Irish wolf hound, Merlin, out for a long walk in the woods somewhere in Colorado.  They have a close encounter of the third kind (but it isn’t aliens) in the forest that causes them to become enchanted in a way Grady has never experienced before.  What they happen upon follows them back home and starts sneaking into their house when darkness falls.  It isn’t long before Grady and Merlin have the two furry creatures cornered (think of the little Ewoks from Return of the Jedi) and that’s when the real fun begins.

Across town, Cammy Rivers, the local veterinarian, is called upon to help the owner of several thoroughbred horses.  The horses broke out of the barn and went into a kind of trance that left them utterly calm and totally at peace.  It seems the horses heard or saw something that human beings couldn’t.  While Cammy is trying to figure out what in the hell happened to the horses, Grady calls her to come over and observe something rather spectacular, but he won’t tell her what it is.

In the same area where both Grady and Cammy live, Henry Rouvroy arrives at his twin brother’s house.  He hasn’t seen his brother, Jim, since they were children, but Henry has kept tabs on him and his wife. Henry looks just like his brother and has dark motives for finally visiting Jim out of the clear blue.

Lamar Woolsey is a distinguished professor of physics and of the chaos theory.  He likes to spend his free time in Las Vegas winning thousands of dollars at the blackjack tables and then giving the money away to those people in need.  For him, there is logic in chaos.

Tom Bigger is a homeless person who usually lives in a cave near the beach.  He’s a large man with a beat-up face that tends to frighten people.  He has no friends.  One day he sees something that changes his life forever and puts him on a journey to fulfill his destiny.

Liddon Wallace is a successful attorney who hires a killer to murder his wife and step-son.  After having been married for several years, Liddon now wants his freedom without giving up most of his money to get it.  Liddon also gives the murderer permission to sexually use his wife in any way he desires before killing her.  He is the kind of husband women should avoid with a ten-foot pole.

What do all of these characters have in common?  That is supposedly explained at the end when their interconnection is discovered.  Whether or not it is adequately explained is one of the main problems I had with the book.  Also, to add to the plot, the U.S. Government later enters the picture when Homeland Security finds out about the two furry creatures that have taken over Grady’s home.  The head of the government taskforce is a man named Jardine, and he isn’t a nice person.

For me, the best parts of the novel dealt with the furry creatures and the government’s attempt to take them away from Grady and Cammy.  The whole novel could actually have been centered on this one thing, and it would have been complete in and of itself.  Boy, I loved those creatures.  They made me laugh and feel alive.  I hated it when the government appeared and took over, wanting to find out exactly what the creatures were and how they’d come about.  The thing is these words are totally inadequate to describe my true emotions about the scenes involving Puzzle and Riddle (the names given to the two creatures).  For me it was like Dean Koontz had tapped into something very special that was astonishing in nature and was able to change your whole outlook on life.  Whatever it was, it spoke to the inner child within me and had me desiring something more profound than what I now have in my life.  In a way it was like a deep glimpse into what true happiness is, if we could only find it inside ourselves.

The separate storylines involving Henry Rouvroy, Liddon Wallace, and Tom Bigger were less satisfying to me.  Because of the way the storylines of these secondary characters were tied up, I felt as if larger parts of the novel had been edited out, explaining in more detail why these characters were important and necessary to the book.  In my opinion, they could have been left out entirely and the novel would have been much better for it.  In fact, I’d rather have had a whole novel dealing these unique and awe-inspiring creatures and their adventure with mankind.

In many ways Dean Koontz is a wordsmith who has a rather unique style of writing that’s extremely descriptive in the images he creates for your mind.  Are the characters intriguing?  Yes, again.  Even Henry Rouvroy, Tom Bigger, and Liddon Wallace were great characters to read about.  They just needed to have their own books with more to tell.  Would I recommend this novel to others?  Yes, I most certainly would.  The parts I loved about the novel far out shadow those I didn’t.

If I was writing a screenplay based on this novel, I would leave out Henry Rouvroy, Liddon Wallace, and Tom Bigger.  What about Lemar Woolsey?  Well, Lemar has a particular part to play in the book that isn’t revealed until the last third.  As Lemar might say, “Out of chaos arrives knowledge and a fluidity of events that show the synchronicity of life and how everything is connected to each other.”  I wish I’d read this book when I first got out of the hospital.  I certainly needed it then.  But, then again, I guess I also need it now with all the chaos that’s going on in my life.