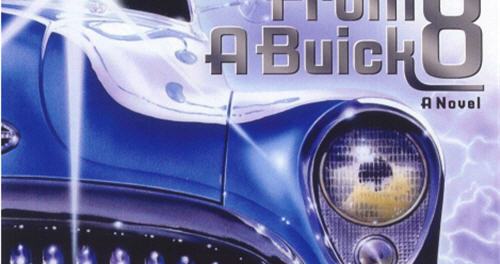 As a long time reader of Stephen King’s fiction, I personally think of him as the “Charles Dickens” of American Literature for the 20th Century and would gladly argue the case with any critic.  This author has certainly proven himself time after time for the last forty years.  I probably would have said Edgar Allen Poe, but King’s storytelling is as much about life in American during each decade as it is about the horror of humanity and the supernatural.  That’s what makes his novels so much fun to read.  You find yourself experiencing them from an emotional point of view, which is a lot like living through the eyes of the characters.

This is one of the reasons his books have sold hundreds of millions of copies with a ton of movies being adapted from them.

With From a Buick 8, the author once again proves that no one does it better, not even James Bond.  This is the story of Troop D of the Pennsylvania State Police and the 1954 Buick they’ve kept hidden for twenty-two years in Shed B behind their barracks in the rural community of Statler Township.

It begins in 2001, the year after Trooper Curtis Wilcox is killed in a terrible traffic accident.  His eighteen-year-old son, Ned, begins to hang around the barracks in an effort to keep the memory of his father alive.  In time, he discovers the Buick in Shed B and questions Sandy Dearborn, the commander of Troop D, about it.

Sandy decides to tell Ned the background history of the car and the part his late father played in it-from the discovery of the abandoned Buick at a gas station by Troopers Curtis Wilcox and Ennis Rafferty in 1979, to the disappearance of Rafferty a few hours later, to the stark realization of just how dangerous this oddity of a vehicle is, and to the hideous other-world creatures that occasionally popped out of its trunk.

Twenty-three years later, however, the car is still hungry and decides to go after the son of the man it could never catch unaware.

From a Buick 8 takes the reader into the small family of Troop D and the secrets they kept hidden for over two decades.  It’s about a car that may be a portal to another dimension…a car that’s always waiting patiently for someone to get too close to it at the wrong time.  But more important, this is a story about friendship, the curiosity that people have for the unknown, and the journey an eighteen-year-old boy has to take in order to become a man.

Only Stephen King could write a book in which the characters don’t just come alive for the reader, they become your friends in every sense of the word and you soon find yourself caring about what happens to them.  That’s the power of Mr. King’s storytelling.  You’re not really reading one of his novels, you’re living it inside your mind!

This is a certainly a book grabbed me in the first few pages and didn’t let go till the end, when I felt a deep sadness in my heart for a past that can never be relived.

I remember when this novel came out and I saw a GM commercial on television about the legendary car designer, Harley Earl.  Guess what he was standing beside?  Yep, a 1954 Buick Roadmaster just like the one in From a Buick 8!  That memory still gives me goose bumps today.

Pick it up right here.

6 Comments on Stephen King ‘From a Buick 8’ Review