Olson has once again produced a master collection in the fifth release in the Exotic Gothic series. Like the prior anthologies, he focuses on the Gothic literary tradition of suspense, fear, and atmosphere rather than gore and violence. Part five comes in a two-volume set and I decided to cover them both in this review. In my mind, they flawlessly stream into one another and shouldn’t be separated!

In his introduction, Olson says that the new Gothic “expands the imagination” and the authors here capture that wonderfully. While traditional Gothic was dark, eerie, and full of the supernatural, it was written in a time when sexual boundaries were pushed only behind very closed doors. Modern authors have thrown those doors wide open, and their exploration of the sexually provocative facets of Gothic horror are amazing. Volume 1 opens with Deborah Biancotti’s chilling tale of sexual tension, family, and ancient Italian superstitions. Using Venice as the backdrop was a brilliant stroke. The winding, twisting streets of this ancient city on the water parallel the dark curves and dead ends in the haunted soul of our protagonist. Simon Clark’s tale, “L’Amour Est Mort,” is a beautifully crafted ghostly tale. The narrative centers on a famous musician and the structure is that of a song. Very clever and it weaves a haunting melody into the prose. In Volume 2, Lily Herne’s “XYZ” reaches into the colonial fear of native sexuality and blends it with ancient fears of Man against Nature. Strangers in a strange land become something unrecognizable, even to one another. Reggie Oliver’s “He Who Beheld the Darkness” reaches into the ancient world of the Middle East and juxtaposes those mysteries with the modern world very well. Like Lovecraft, Oliver depicts a world of modern machines and rationality built overtop far older and darker monsters from eons ago. 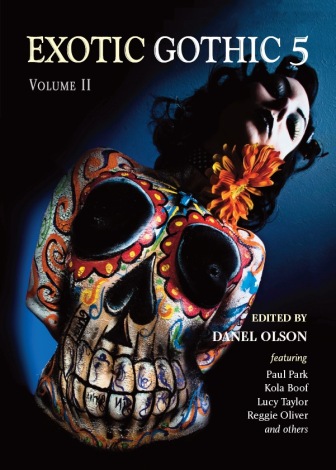