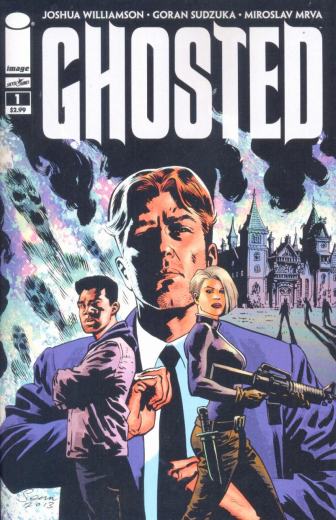 Holy high concept! A badass thief (Jackson Winters) with a troubled past is sprung from jail by an aging billionaire (Markus Schrecken – love that name) with a penchant for collecting occult items (hey, even billionaires need a hobby). Schrecken has set his sights on the one ghoulish item that has eluded him so far – a ghost. And Winters is the lucky guy who gets to assemble a crack team and head for the haunted Trask mansion, renowned for its bloody history and slated for demolition in two weeks (nice ticking clock). If the premise sounds a lot like a classic heist story – think Oceans Eleven with ghosts – you’re not too far off the mark.

Haunted house stories are defined by the quality of their phantom villain, and the well-adjusted Trask family with their ties to the mystical and cult suicide show promise – think of them as a spectral version of the Sawyer clan from The Texas Chainsaw Massacre films. The first issue is mostly set-up but the exposition is handled with care and never bogs down the razor-sharp storytelling.  The narrative moves like a bullet, characters pop and the premise just clicks. Surprisingly, Williamson manages to infuse the script with some great bits of snappy humor that don’t detract from the spooky parts.

The art adds another level of atmosphere to the proceedings, harkening back to the style of the old EC comic books, boasting deceptively simple yet precise linework that seems perfectly suited for this creepy caper.  Just the way cinematography plays a vital role in horror movies, colors can make or break a horror comic book. Colorist Miroslav Mrva’s muted palette gets it right, adding the right emotional shading to the story.

With such great horror books like Lock & Key, Severed, American Vampire and The Walking Dead hitting the stands, horror comics are back in force. And Ghosted is an excellent addition to the genre.  For those who can’t make it to a brick-and-mortar comic book store, comiXology offers the digital version.  Check it out!